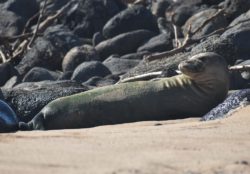 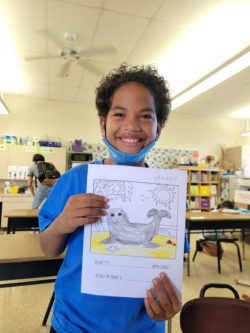 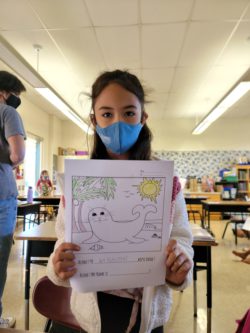 Molokai students got to name a Hawaiian monk seal born on Molokai during the pandemic. The one-year-old male seal was gifted his name, Kepuhinui, meaning “the great one of Kepuhi Beach,” during a haku inoa, or name weaving exercise, by almost 20 second grade Hawaiian language immersion students at Kualapu’u School.

Most young monk seals get identification tags attached to their hind flippers, but the seal, previously identified only with a fading bleach mark L4, finally got a culturally meaningful name in added to his identity in May.

The naming process used environmental, geographical, astronomical and cultural information particular to a specific seal to weave together a unique name, according to the Hawaii Marine Animal Response (HMAR). The organization coordinated the process along with local Molokai-based curriculum developer Maile Naehu of Ka Hale Hoaka, and in collaboration with NOAA Fisheries and the Hawaii Department of Land and Natural Resources (DLNR). In their talk-story style discussions, students gravitated toward a popular west end beach, Kepuhi, which is frequented by a number of seals, visitors, surfers, fishers and local families. The students then added nui, which connotes an individual with regal or meaningful presence.

“When our kids get to name one of these rare animals, they elevate visibility for how unique each of these seals are,” said Todd Yamashita, the Molokai Operations Manager for Hawaii Marine Animal Response (HMAR), who conducts community engagement and other species conservation work on Molokai. “I want our kids to know that this is their seal, that it’s Hawaiian like them, and something they can feel good about. Our kids already understand and practice kuleana (responsibility), so it’s cool to reflect back to them that they already play an active role in conservation and community building.”

During the process, students learned more about the highly endangered Hawaiian monk seals, along with their history, biology and cultural importance. Being part of the seal’s life also helped students realize the important conservation role they play in their community.

“Our kids were tasked with talking about monk seals on Molokai,” said Kumu Loke Han. “With the kids being allowed to name it, it puts some kuleana on them to be part of that seal’s circle of protectors. Whenever you give a name, there’s a special bond between the person giving the name and the person receiving the name. And it was funny because this seal we were talking about, some of the kids actually saw it or maybe saw its parent or… knew where it would come up on shore, so that even strengthened the bond between the keiki and the seal we were blessed to name.”

Han said through naming the seal, the students learned about the cultural process of naming with Kumu Maile but also gained a greater understanding of the seal’s place in the ecosystem and that fish don’t just belong to kanaka – the kai belongs to the seals, too.

She said Naehu explained as part of the name’s meaning “that this seal is going to be a great representative of not just our island as a whole but specifically that beach where it likes to frequent” on Molokai’s west end.