Students Get a Glimpse of the Future 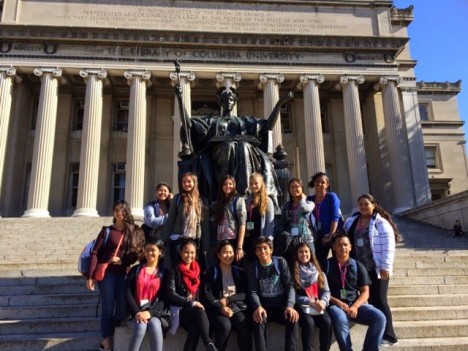 MHS students at the Library of Columbia University. Photo from MHS MCCTC blog.

Thousands of miles away from the quiet streets of The Friendly Isle, Molokai High students braved crowded subways and the fast-paced lifestyle of New York City. The students experienced both the East Coast and post-high school life during a six-day tour of colleges and workplaces.

“It’s so exciting,” said junior Misty Parker at an Oct. 30 community presentation of the students’ trip. “You always have to be on your guard, because there’s just people everywhere.”

High school educator Ric Ornellas, who lived in New York for 40 years, came up with the idea to visit New York over a year ago and helped form the Molokai College Career Tour Club (MCCTC), a group focused on preparing students for higher education and the workforce. After a year of fundraising, four MHS sophomores, nine juniors and one senior traveled to New York City and New Haven, Conn.

“I am a teacher, but the classroom is limited,” said Ornellas. “… We’re really trying to bring exposure to the kids.”

The group toured the campuses of New York University and Barnard College and walked past perfume labs at the Fashion Institute of Technology. At Columbia University, chaperones gave students the task of talking to random college students. MHS junior Giesha Nunez said she was impressed with the way the Columbia students carried themselves.

“They have a destination, a goal to fulfill,” wrote Nunez on a blog the students kept during the trip. “… They had such determination and confidence when they applied that it inspired me to do the same with my application process in the future.”

The final college on the itinerary was Yale, which several MCCTC students said they hope to attend in the future. An acting assistant dean at Yale interviewed 10 students individually, offering career advice and helping draft personal statements for college applications. Molokai students also brought a piece of the islands to Yale, exchanging song and dance with some of the college’s Native American students.

MCCTC students visited different work sites, including major banks, a construction site, an architectural firm and the set of talk show host Dr. Oz at ABC Studios. They also made stops at the Empire State Building, Rockefeller Center and the 9/11 Memorial. Ornellas explained that the students met with professionals and learned more about what it was like to work in New York.

Club president Edel Mae Alvarez, who is interested in studying economics in college, said she was particularly inspired by career advice from an accountant during a visit with New York paddlers who’d participated in this month’s Molokai Hoe.

“[She said to] be flexible and find things that make you happy,” Alvarez, a senior, recalled. “… When you’re happy about something it’s going to help you endure all that may come your way.”

During the community presentation, teachers encouraged MCCTC members to share their experiences with other students, in hopes that others will be inspired to explore post-high school options through MCCTC. Ornellas said club members also want to travel to the West Coast later in the school year to visit such colleges as Stanford University, Mills College and the University of California Berkeley.

“There’s a bunch of potential at this school [MHS], even if [students] don’t know it,” said MHS junior Oceana Madani, who wants to study theater and event planning in college.

Junior Alexandria Simon said that seeing the colleges and workplaces showed students that transitioning to other places is possible.

“It changes your perspective,” said Simon, an aspiring doctor. “It gives you confidence that you can survive on the mainland. We’re not the only state that shares aloha.”