Molokai High School (MHS) students  rallied together May 2 to stay safe during the upcoming graduation weekend, especially when getting behind the wheel. Seniors pledged to not drink and drive, while the Students Against Destructive Decisions (SADD) club awarded students who made the same pledge for prom and banquet nights. 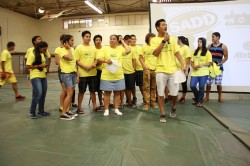 Willing-McCutcheon said he wanted to bring awareness to teenagers about the effects of their driving decisions and how unsafe driving affects the entire community.

As part of his project, which is titled “Juvenile Joyriding: Underage and Unlicensed,” Willing-McCutcheon  will create a video for a nationwide contest. Lee said MHS is the only school in Hawaii that has entered, and the grand prize is $10,000.

Students at the rally participated in an obstacle course while wearing goggles that simulate drunkenness. They watched a locally-made video created with a cast of MHS students several years ago that depicted the deadly effects of drinking while driving. Lee and School Resource Officer Michael McCutcheon told students how much they care about them and how their decisions have lasting impact. 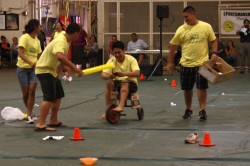 “I may be on some of your cases all the time about driving without a license and all that, but it’s because I care so much,” McCutcheon said. “Kids on other islands can’t walk, can’t talk and may not be alive because of the decisions they make.”

Lee said crashes are the number one killer of youth under age 24. She presented this information to students at the rally and told them that of the 4.2 million teen drivers in the country, 2.25 million will be involved in a crash each year, 400,000 will be injured and 5,000 young drivers killed.

She said summer is the deadliest time on the road for teenagers, but most incidences are preventable by making good decisions.

She also said parents can be involved in keeping their young drivers safe by riding with them frequently and setting a good example for them.