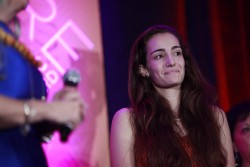 Molokai students took top honors at the Maui Economic Development Board’s (MEDB) Ke Alahele Education Fund Benefit Dinner and Auction last month. The event raised $309,000 to support Science, Technology, Engineering and Math (STEM) projects in Maui County and throughout the state, and recognized students for their accomplishments in the field with the presentation of the Daniel K. Inouye Innovation Award.

The student sister team of Sarah Jenkins and Lily Jenkins of Molokai High School took first place for their “March of the Molokai Mangrove” project. The Jenkins sisters were each presented with a $2,000 award to support their continued technology pursuits. In addition, a $2,000 grant will go to their eight-year mentor, Arleone Dibben, for her environmental foundation, Nene O Molokai Foundation; and $4,000 in technology upgrades and equipment will benefit Molokai High School’s STEM lab.

The Red Mangrove, one of the most invasive coastal vegetation in Hawaii, has established itself along the south shore of Molokai and infringing on the island’s coral reefs.  In this first-of-its-kind study, the Jenkins team revealed the socioeconomic and ecological effects of Red Mangrove on the island.

“Growing up on Molokai, it’s so special,” said 15-year-old Lily Jenkins. “Our environment is unique with its wetlands, Native Hawaiian plants and species, and I got to appreciate it all through science.” 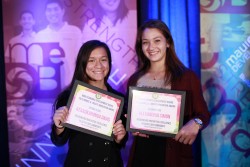 “If no management plan for red mangrove is adopted, this invasive species will overtake 35.67 percent of Molokai’s fringing reef in the next 100 years,” Jenkins predicted.

Their project caught the attention of ESRI, one of the largest global software companies, which asked the Jenkins’ sisters to show 17,000 software engineers how they used technology for their Molokai project.

Established in 2012, the Daniel K. Inouye Innovation Award is presented to the student team that demonstrates the most innovative use of STEM tools and capabilities to serve and improve our community.  Maui County students grades six to 12 are eligible to enter. For more information, visit medb.org.