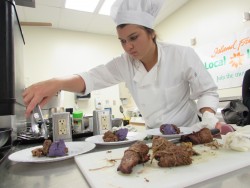 Sometime within the next few months, diners at the Sheraton Waikiki’s Kai Market restaurant will find a beef maple bacon pesto roulade on the menu. Honey-glazed bacon and pesto wrapped in a slab of pounded beef, tied, baked and served in slices with sweet potato mash, the mouth-watering dish will be prepared not by a renowned chef but by a teenage culinary prodigy: Molokai High School senior Kiana Simmons.

Last month, Simmons’ roulade won her top honors at the statewide “Buy Local, It Matters” (BLIM) Recipe and Cooking Contest. As co-winner of the Best Recipe Award, she and Kea`au High School senior Kenny Nguyen will have their dishes featured at the hotel’s restaurant in the near future, said Kai Market Executive Chef Darren Demaya.

“Watching these high school kids was an eye opener for me because they are cooking at such a young age,” said Demaya, who’s been in the culinary business for 18 years.

The contest, which was open to high school students across Hawaii, was the first youth cooking competition for BLIM, a campaign that began in 2005 to encourage support of local producers. Participants had to submit a non-dessert recipe involving at least two local ingredients and write an essay about what buying local means to them. Those with the best submissions were invited to prepare their dishes during a cook-off at the University of Hawaii at Manoa College of Tropical Agriculture and Human Resources (CTAHR), one of the organizations involved with BLIM.

Simmons said she listed several local ingredients and settled on a beef roulade with pesto and bacon, adding drizzled honey at the suggestion of her sister’s fiancé Sherwood Hiro, the manager at Fresh Catch on Oahu. Her recipe was selected to represent Maui County at the state level and earned her an all-expense experience, including a flight to Oahu and a one-night hotel stay.

“I yelled,” Simmons said of the moment she found out she’d won. “I was just so excited. I couldn’t wait. Every day I’m just like ‘Oh, a couple more days until I go [to Oahu]!’”

Simmons’ mother, older sister, aunty and grandmother joined her on Oahu for the second part of the competition. On Dec. 5, she and four other high school students chopped and baked their way through a two-hour, Food Network-like cook-off in CTAHR’s kitchen. Demaya served as judge along with KITV news anchor Pamela Young and Sharon Hurd of the Department of Agriculture.

“I was just so nervous. In the middle of the cook-off it was super quiet,” said Simmons. “All you hear is simmering or things frying. … I usually sing when I cook but I said, ‘I can’t sing this time.’” 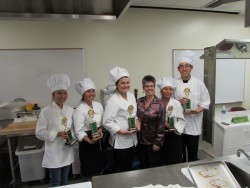 Student contestants with Maria Gallo, Dean and Director for Research and Cooperative Extension at CTAHR. Photo courtesy of University of Hawaii at Manoa CTAHR.

Her mom and aunty were so nervous they had to walk out during the competition, said Simmons. However, the judges and contest organizers came away impressed. Maria Gallo, Dean and Director for Research and Cooperative Extension at CTAHR, presented Simmons and Nguyen with the Best Recipe Award for their intricate dishes. Nguyen crafted a mushroom and pork shumai, while Mid-Pacific Institute junior Krislyn Miyagawa won the overall contest award for her seared opah.

“I was most impressed with Kiana’s poise,” said Gallo. “She showed grace under pressure during the contest … and she was able to eloquently describe her creation to the judges.

Demaya added that the degree of difficulty for Simmons’ dish also contributed to the judges’ decision.

“I think [Kiana’s] dish was the most creative and hardest to prepare,” he said. “I also like the fact she used everything from Molokai.”

Contest organizers paid for all of the ingredients, and while Simmons wasn’t able to use all of the Molokai ingredients that inspired her recipe, she did bring some of the island’s sweet potatoes and pesto with her.

According to Demaya, Simmons and Nguyen will each have their dishes featured twice in one month. He hopes to bring them into Kai Market’s kitchen to make their dishes alongside his cooks so they can get the experience as students before they graduate.

“I feel so connected when I start to cook or when I start to do something that involves food,” she said. “… I hope this inspires teens to follow their dreams because nothing is impossible.”