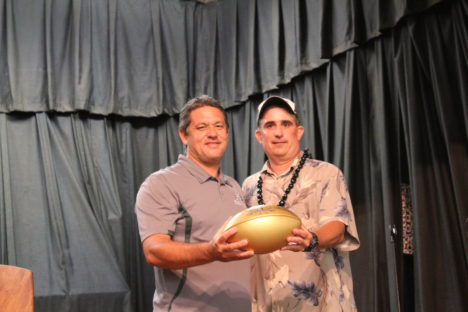 More than 160 certificates were handed out to Molokai’s student athletes at last Wednesday’s 2016-2017 Molokai High School Athletic Recognition Banquet held at the Molokai High School Cafeteria. In addition to the certificates handed out by Athletic Director Lee DeRouin and his staff, fall, winter and spring sports were all recognized and there was also a Parade of Athletes and recognition of Maui Interscholastic League individual and team champions.

“This year’s athletic banquet is dedicated to Bill Umi [who passed away this year],” announced DeRouin at the event. “Bill was a passionate and devoted supporter of Molokai High School Athletics. His contributions included many hours as and official, volunteer coach, play-by-play announcer, supportive parent, cheerleader, and the Athletic Director’s go to guy. Thank you, Bill, for being a true ‘Molokai Farmer.’”

“Last year Molokai High School received this golden football from the NFL commemorating and celebrating Super Bowl 50,” he explained. “It was kind of big deal because only a few select high schools in Hawaii got it. Schools like St. Louis, Punahou, Waianae, and Kahuku… and Molokai. Our school was chosen because we have a Super Bowl Champion who graduated from here: Kimo Von Olehoffen, affectionately known as ‘Scooby’ from the Class of 1989, played defensive tackle for the Pittsburgh Steelers and won a Super Bowl in 2006.”

The golden football will be displayed in a glass case in the front of The Barn for all to see.

DeRouin also announced that The Friends of Molokai High and Middle School Foundation had reached their fundraising goal and has purchased a new football scoreboard for Molokai’s team and it will be installed soon and be ready for the upcoming eight-man football season.