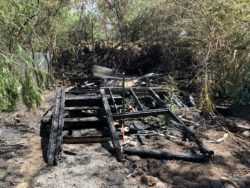 A structure fire in Kawela along Kamehameha V Highway just before 8 p.m. last Friday night destroyed a small cottage occupied by one person. The highway was closed for about 30 minutes while crews got the blaze under control.

The 10-by-12-foot studio cottage was fully engulfed when fire crews arrived, according to the Maui Fire Department (MFD).

The occupant of the house, Christi Feeter, said it all happened in a matter of seconds.

“I saw a spark by the outlet, grabbed my laptop and phone, and the flames were already up the wall,” she said. “I ran outside to grab my dog and a few seconds later when I looked back, it was just engulfed in flames, 20 feet high.”

She said two other people live on the property and she was worried about them but was shaking so hard she could barely dial 9-1-1.

The Fire Dept. got the call at 7:50 p.m., responding with three engines and one tanker. Crews from Kaunakakai, Ho’olehua and Puko’o got the fire under control by 8:10 p.m. and extinguished a little after 9 p.m.

The fire destroyed most of Feeter’s possessions.

“All I have left is my truck, my phone and laptop, my pajamas I was wearing, and my dog,” she said the next morning.

Though the official cause of fire was reported by MFD as undetermined as of Sunday, Feeter said the fire inspector told her he believed it to be an electrical fire.

She said extension cords powered the hale running from the main house. The fire inspector told her all electrical fires he’s seen are caused either by improper use of extension cords or too many plugs on one circuit, she said.

MFD reported there was some slight fire damage to the exterior of an adjacent outbuilding. The fire had also spread to some adjacent brush but none of the other outbuildings or main home on the property was damaged.

The occupant of the main house was evacuated until the fire was brought under control, then allowed to return, according to the MFD.

“I’m shocked, it could have been so much worse,” said Feeter. “I don’t know how it didn’t race up the hill with all that dry grass.”

She said if she hadn’t cleared debris and trash from the area previously, she believed the fire would have caused much more damage. She cautioned fellow residents to use caution in the current drought, especially with old homes.