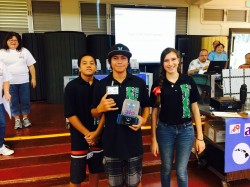 The second tournament was the 2014 aio Hawaii VEX IQ Qualifying Tournament on Nov. 8 at Pearl City High. Thirty teams entered the event, all of whom were from Oahu with the exception of the two Molokai teams.  This time, Team 434K Kalo Farmers won the Design Award and Trophy, as well as third place for Teamwork Champions, qualifying them also for states.  Team 434K members were Evelyn Haase, Peter Keliihoomalu, and Kaimana Paleka.