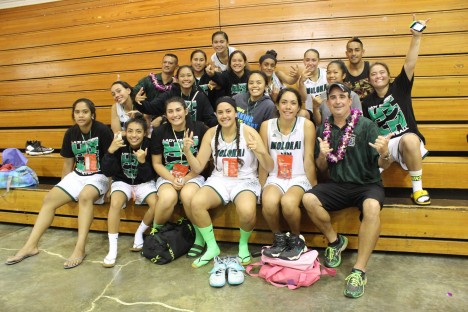 The Molokai girls’ basketball team poses after the final game, a 40-34 win over Lanai. Photo by Colleen Uechi.

Lately, the Molokai girls’ basketball team has had a flair for the dramatic. After winning the majority of their league games by wide margins, the Lady Farmers kept fans on pins and needles during a heart-stopping series of season-ending games.

Just days after a pair of one-point wins gave them the Maui Interscholastic League (MIL) Division II title, the Lady Farmers again won down-to-the-wire duels, this time in the state championship on Oahu from Feb. 10-12, to claim seventh place over league rival Lanai.

“The last six games have been nail-biters,” said Head Coach Lee DeRouin. “…That’s been our strength all year, is being able to execute with two minutes left in the game.”

The Farmers shook off a 46-27 first-round loss against University Lab last Tuesday and went on to beat McKinley 39-36 on Wednesday and then Lanai 40-34 on Thursday in the tournament’s consolation bracket.

Against UH Lab, the Farmers got off to a slow start, scoring only three points in the first quarter. The Junior Bows jumped out to a 22-9 lead by halftime.

“We were a little bit too patient at the beginning,” said DeRouin. “… But the girls responded with some changes we made at halftime. We got a little more fluent with the ball and we were able to get better shot selection.”

The Lady Farmers doubled their field goal percentage in the second half. However, turnovers plagued Molokai, as they gave up the ball 21 times to UH Lab’s nine. While the loss eliminated them from finals contention, players had a new focus. 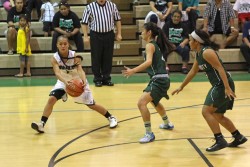 “[Our goal is] being able to say we won our last season game,” said sophomore forward Brooke Keliihoomalu.

On Wednesday, the Lady Farmers came out reenergized against McKinley in a win-or-go-home match for both teams. Molokai controlled most of the game, playing a hungry brand of defense that forced over 20 turnovers out of the Tigers. However, McKinley took advantage of free throws and with two minutes left, led 36-31.

“I was like squeezing my hands together, hoping and praying we get up by anything, by one [point], by two, anything,” said Molokai junior forward/center Kelcyn Balbas.

Then junior guard Hepuakea Falealii sank a momentum-changing three-pointer that DeRouin said “deflated McKinley” and made it 36-34. With barely a minute to go, Falealii, sophomore guard Precious Rawlins and freshman guard Camille Ledesma each made free throws to reestablish Molokai’s final lead.

Molokai’s final game on Thursday was a rematch against MIL rival Lanai, with the winner taking seventh place. As they had for most of the season, both teams matched each other point for point until Molokai got into foul trouble and allowed Lanai to grab a 17-11 lead at the half. However, DeRouin said he noticed the Pine Lasses weren’t making many substitutions and began using a full-court defense against a tiring Lanai squad.

“I think what helped us was our depth,” said DeRouin. “We were able to play quite a few kids in the first half, and even though we were down it was worth it, because it saved us that extra energy that we needed to pull out at the end.”

The teams were tied for much of the fourth quarter, and with a minute to go, Molokai led by two. Gutsy play under the basket earned the Lady Farmers crucial free throws with seconds to go, and a final defensive stand sealed their last win of the season.

Balbas said Molokai’s experience in close games helped the Farmers’ down the stretch.

“The games in MILs, taught me how to be more flexible at the point when only seconds [are] left and we’re up only by two,” she said. “… That’s why we know now what not and what to do when the seconds like that is on the board.” 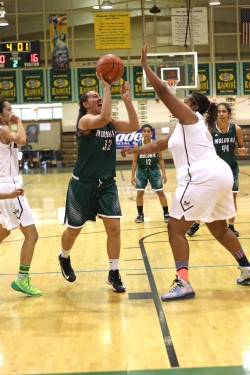 Senior forward Rebecka Adolpho goes up for the shot against McKinley. Photo by Colleen Uechi.

Molokai’s final record now stands at 15-2. They’ve won the MIL D-II title three years in a row and seven times in the last eight season, and this trip to states was their third in a row. The Lady Farmers became the first MIL team to win the state title in 2009.

Throughout the tournament, senior forward Lehiwa Pedro consistently used her 5-foot-11 frame to nab team highs in rebounds each game, including 13 against McKinley. Falealii was the Farmers’ main source of offense, scoring 16 on the Pine Lasses and 11 on the Tigers. Ledesma was the second highest scorer and also turned in one of Molokai’s best defensive performances, including an eight-steal showing against Lanai.

“[I’m proud of us] coming together and playing as a team,” said Falealii. “We got to bond one last time with our seniors.”

The tournament was the final appearance for senior forwards Pedro, Rebecka Adolpho and Edel-Mae Alvarez. Falealii said she’ll miss their personalities, and DeRouin added he’ll miss the example they set on the court.

“They’re great role models, not only for the team but also for the younger girls,” he said, adding that middle school students “gravitate towards them” at games. “They set a good role model of what hard work is all about.”

It was also DeRouin’s final game as coach, as he’ll step down to focus on his duties as Molokai’s athletic director.

“[He’s] very humble,” said Falealii. “He knows the sport of basketball really well. He knows how to talk to us. Other coaches just yell and swear.”

DeRouin said they’ll worry about coaching changes in the future. For now, the team is enjoying the end of another accomplished season.

“There’s a state champion, and we’re the consolation bracket champion,” he said. “So we’re walking away with a championship of our own.” 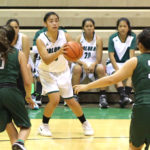 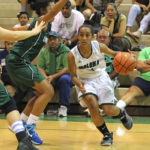 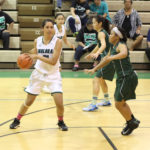