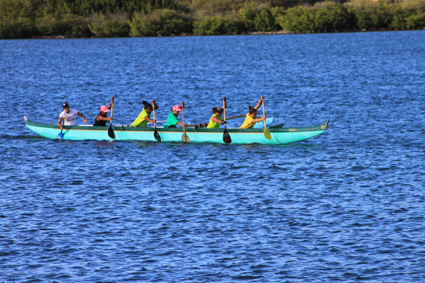 While Molokai is an island rich with skilled paddlers, members from one canoe club in particular –Wa`akapaemua –has been making quite the splash this season. Last weekend, both the men’s and women’s teams competed in the annual Pailolo Challenge, which spans the 26-mile channel between West Maui and South Molokai. The men took first in the Men’s open division and a close second in the overall race with a time of 2:55:33, while the women came in seventh in the Women’s open division with a time of 3:46:33.

Molokai Canoe Club also competed in the Men’s open division, finishing with a time of 3:40:42. 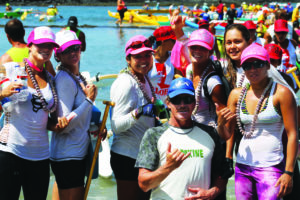 Wa`akapaemua Women
There’s more to paddling than just being in the water, according to women’s team captain Tiana Miguel, who has been paddling for over 20 years. In addition to training in the canoe, the women also do cardio and aerobic conditioning, from long runs to pulling tires to ab workouts.

“We’re small in stature, so we have to train extra hard to keep up with some of the other Maui teams,” she said.

There are currently 12 women on the team, who range in age from 20 to 37. While each individual woman carries extensive paddling experience, this is only the second year the team has been paddling together as a group, according to Miguel.

“It’s hard because we’re all young moms, and some of us work or are in college, so finding the time to practice and train is tough. It’s the biggest challenge,” she explained.

The team trains Monday, Tuesday and Thursday afternoons, and some Saturdays as big races approach. Miguel said that it is this rigorous training regimen enforced by their coach, Keola Kino, which has led to their success this season.

“We train a lot harder this year, with not only paddling but with cardio,” said Miguel. “We never knew we could do so well, but…once we got that first taste [of victory] and came in second, we all just want it more.”

The women’s team placed second in both the Queen Ka`ahumanu Maliko Race and the Dutchy Kino Memorial Classic, both on Maui last month. On Sept. 3, they placed tenth out of 130 teams at the Queen Lili`uokalani Race in Kona.

Miguel hopes the Wa`a women’s success this year will draw more women paddlers next year. If there are more people who try out, there will be more competition to push everyone to be better, she said.

Until then, Miguel and her teammates are focusing on the last and biggest race of their season –the Na Wahine O Ke Kai, an annual all-womens race across the Ka`iwi Channel between Molokai and Oahu on Sunday, Sept. 23.

“Now that we know our potential, I just want to train even harder,” said Miguel. “It feels good to go to that podium.” 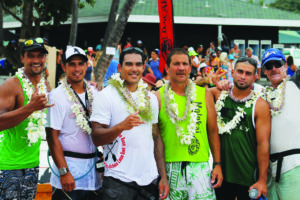 It has been a landmark season for the men paddlers, who have placed in all four races they’ve competed in this season.

In addition to their recent victory at the Pailolo Challenge, the men took first at the Great Kahakuloa Race, second at the Dutchy Kino Memorial Classic and third out of 150 competing teams at the Queen Lili`uokalani Race earlier this month.

Team captain and acting coach Bozo Dudoit, who has been paddling for over 40 years, said that this year, their goal was to become the best crew in Maui County.

“We beat out Hawaiian [Canoe Club] this year, and hopefully will be able to trump Primo, the team to beat in Maui County,” said Dudoit. The team bested Hawaiian, one of the best teams in Maui, in the Great Kahakuloa Race last month, which is the first time they have beaten them in over 30 years, according to team member Clint Labrador.

The 15-member men’s team began training for this season in October of last year, starting with one day a week and then progressing to their current regimen of five afternoons per week. In addition to hours of paddling, they practice swim drills, conditioning exercises and sprints.

Extended training hours have led to a close-knit team, which Dudoit insists is the key to this group’s success.

“You can be superman, but if you’re not bonding with the crew, it ain’t going to happen,” he said. “Bonding is just as important as being in shape.”

When they are not paddling, the team may be found cleaning yards around the island to raise funds for the club. This year, they have already made about $5,000, most of which goes toward entry fees for the races. They want to be able to do more races so that they are better prepared for the big ones like Pailolo and Molokai Hoe, according to Dudoit.

The team’s next race is the 59th annual Molokai Hoe, which spans the 26-mile-long Ka`iwi Channel between Molokai and Oahu. Over 1,000 paddlers from all over the world are expected to compete in this year’s race, which will be held on Sunday, Oct. 7.