Before she visited Molokai as a world-traveling, professional storyteller, Diane Ferlatte was just trying to get her son Joey interested in reading. Books couldn’t pull him away from the TV, so Ferlatte herself became the characters: a croaking frog, a gravelly voiced old woman, a hissing snake. Suddenly, Joey started to pay attention. 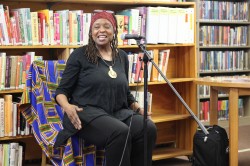 Diane Ferlatte taps a rhythm during one of her songs. Photo by Colleen Uechi.

“He was listening like it was live TV,” Ferlatte recalled. “I went, ‘Ohhh, I see what I have to do now.’”

Her animated character impressions have been capturing listeners’ attention ever since. Last Monday afternoon at the Molokai Public Library, Ferlatte kept keiki and kupuna riveted as she passed on tales and songs from her family, her travels and other cultures.

“I just like the way she tells stories,” said retiree Mary Kekalia, who volunteers at the library and brought her grandson to the event. “She’s so animated. She’s really a natural.”

Ferlatte took listeners back in time, to a young slave named Jack who disobeyed his mother to go fishing on Sunday and ended up transforming into a stump-legged river monster. She shared stories of animals working together to hold up the sky, and a clever rabbit saving his dingy opossum friend from a hungry snake. Her favorite part of storytelling, Ferlatte said, is making connections with listeners through the stories.

“You can feel the emotions of these different characters, how it affects the audience,” she explained. “… Stories are like a mirror. You can see little things about yourself in it. You can see the people you know in it.”

“With all the things kids are surrounded by,” TenCate said, motioning to a group of kids clustered around a nearby computer screen, “it’s good to get back to the traditional way of preserving stories.”

Family members planted the storytelling seed in Ferlatte long before she began reading to Joey and her daughter Cicely. She said she grew up listening to her father’s stories on their porch in Louisiana and her mother’s songs in the kitchen. After successfully hooking her kids on books, Ferlatte went on to tell stories at parties, and word of her unique abilities soon spread. People have since requested Ferlatte’s talents all across the U.S. and the globe. Her latest visit to Molokai was her fifth to the Friendly Isle. She’s also made storytelling stops on Oahu, Maui, Hawaii Island and Kauai.

Ferlatte encouraged others to continue the tradition of storytelling within their own communities, a concept deeply rooted in the Hawaiian way of life.

“Tell a story when you can, guys,” Ferlatte told the audience. “Especially to the keiki, things you know about that they don’t know about. … A lot of stories are just missing.”