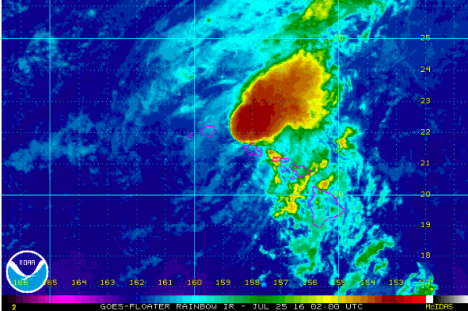 Tropical Storm Darby, which hit Hawaii last weekend, brought minimal impacts to Molokai but caused cancellations of some events and closures of parks and stores.

After making landfall on Hawaii Island Saturday, the storm carried with it high winds, drenching rain and surf advisories. A tropical storm warning remained in effect for Maui County through Sunday. Maximum sustained winds were recorded at 40 miles per hour, with gusts nearing 50 miles per hour.

Molokai High School was opened as an emergency shelter on the island. The Kalaupapa Trail and the Molokai Forest Reserve were closed over the weekend. Some local stores, including Friendly Market Center, closed early at 2 p.m. on Saturday in case weather conditions worsened.

Two standup paddle races scheduled on Molokai for the weekend were cancelled due to the storm. M2Molokai, an annual race between Maui and Molokai on Saturday, as well as the Molokai4Molokai between Kamalo and Hotel Molokai scheduled on Sunday, were called off.

In case of a hurricane or tropical storm, emergency officials advise residents to be prepared in advance. Residents are asked to assemble emergency kits that include one gallon of water per person per day for at least three days, a three-day supply of nonperishable food, battery-powered or hand crank emergency radio, flashlights and extra batteries, first aid kit, medications and personal sanitary items, and basic tools including a manual can opener.

Officials also recommend securing loose items outside your house in case of wind, filling vehicles with gas in advance, monitoring TV or radio for weather updates, and creating and following an evacuation plan for those living in flood inundation zones.

According to the National Oceanic and Atmospheric Administration, hurricane season runs from June 1 to Nov. 30 each year. During that time, the Central Pacific Ocean area experiences an average of three tropical storms each year, two of which become hurricanes.

More emergency preparedness tips can be found at mauicounty.gov/civildefense.