On the windy, rocky coastline of northwestern Molokai, Dr. Marshall Weisler picked up a stone. But it wasn’t just any rock; this stone, like many in the Molokai Land Trust’s Mokio Preserve, has a story.

Weisler is an archeologist and professor at Australia’s University of Queensland. He’s no stranger to Molokai — he’s been coming here at least once a year for the past 35 years to study the island’s many historic sites and piece together a picture of how ancient Hawaiians lived.

To the untrained eye, the rock Weisler held in his hand looks like any other scattered in this arid landscape. But, as he told a group of 30 residents gathered around him for the first public sharing of his work at Mokio last week, this stone was part of a fishing shrine.

“Three quarters of all the fishing shrines on the island are [in this area],” said Weisler. “That means… it was a very important area for fishing.”

Among the rocks are a variety of shells whose contents were once left as offerings, or ho`okupu. By testing pieces of coral also found there, Weisler used radiocarbon dating to determine that this shrine was used in the 1620s — and most of the sites in this area can be dated between 1500 and 1800 A.D. All living things are made of carbon, and the process of radiocarbon dating looks at ratios of carbon isotopes, which change over time, said Weisler. Advances in technology have allowed researchers to obtain highly precise dates — some within about six years — of remains that contain carbon. 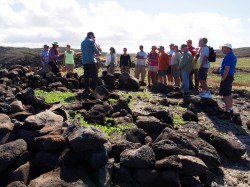 Standing on the site of what used to be a house. Photo by Catherine Cluett

The shrine is positioned a few feet from the remains of a vaguely visible stone wall — the side of what used to be a dwelling.

“Sacred to the east and secular to the west” was the general rule of thumb for ancient Hawaiians to arrange their home and shrine areas, according to Weisler. These remains along the coastline of Kaluakoi represent what would have been temporary habitation for several days at a time, he said.

Along the stone wall is another loosely-arranged grouping of rocks — an oven. By testing charcoal bits left in these pits, Weisler has been able to identify the native tree species that used to grow in the area, as well as from pollen particles left in the soil.

With the deductive reasoning of a crime investigator, the thoroughness of a historian and the environmental familiarity of a biologist, Weisler told the story behind each rock, shell and land formation.

“There’s no one to ask that was around back then – so this is our best guess. That’s what archeology is,” he said. “We’re trying to find out what people were doing and how and when they were doing it.”

Rocks with Purpose
One of the activities Weisler focuses on studying is the making of adze, or ancient stone tools used for wood carving. A kitchen knife is an essential tool in every household today – in fact, you probably have several of different sizes for different uses. That’s how it was with adze a few centuries ago.

“Adzes are the most complicated tools to make,” said Weisler. “You could learn the basics of making a poi pounder in a morning… but it took years to learn to make adzes.” 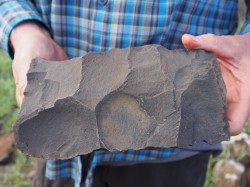 The process begins with finding the right rock.

“Adze rock is different from imu rocks,” he explained. “You want fine-grained rocks that break in a predictable way.”

The smooth, hard stone was formed by “the very last breath of a volcano” — or generally the last stage of eruption, more than 2,000 years ago. Western Molokai has a high incidence of this type of rock.

“There are more adze quarries here than the rest of the Hawaiian island chain put together,” said Weisler. While the size of many of the quarries is small, their numbers are impressive, he said.

Using a larger grinding stone, an adze would be roughly shaped by hitting it with a roundish “hammer stone” made of courser rock. An adze “blank” or basic starting point before further shaping the rock was ideally a perfect rectangle with right angles, said Weisler. If the shape did not come out as desired, it would be tossed back into the quarry. Today, the adzes found in quarries are all rejects, he explained.

At one of the larger quarries at Ka`eo, Weisler pointed to a rounded, fist-sized stone resting upon flat-topped grinding stone. Surrounding it, thin rock chips litter the ground. Here, adze makers would sit giving rough shape to adze blanks, to be completed elsewhere. Imperfect adzes in the area tell a story of failed attempts at making perfected tools. Weisler said there are several tons of rock chippings here.

Weisler has also tracked social relationships through adzes he’s found throughout the Pacific. Today, we have Facebook and email to foster social interaction. But in ancient Hawaii, relationships were formed and strengthened through trade.

Rocks from different areas have distinct chemical signatures, said Weisler. By testing the signatures of rocks found in a variety of quarries, he has been able to trace rocks found in various communities to their origins — and the results are sometimes amazing.

Weisler said using this knowledge, he was able to show that adzes found in Toamoto in the South Pacific were from Kaho`olawe more than 2,000 miles away.

“I had chicken skin for two days when I figured out that’s where it was from,” said Weisler, adding he first checked and rechecked his data before believing this discovery. He’s found similar trading between Molokai communities, and adzes from Molokai found on other Hawaiians islands. He has identified the chemical signatures of nearly 15 different quarries on the west end.

Weisler said he was the first to use chemical rock signatures to trace adzes.

“The more work I do, I connect different places [to discover] human trading relationships…and social connections,” he said.

The art of adze making was lost as soon as metal arrived, said Weisler — metal was easier to trade.

Preserving Environment and History
While Weisler originally studied archeology of the Kawela area of Molokai, now the majority of his work on the island is in the Mokio area. He said his work is funded largely by the Australian Research Council and the University of Queensland. 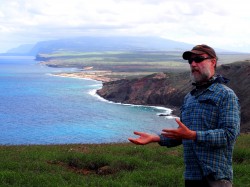 The Mokio Preserve is a 1,718 acre parcel owned by the Molokai Land Trust, a local organization with the mission of preserving and restoring native plants and animals as well as cultural sites on Molokai. Mokio includes five miles of rugged coastline, native dune ecosystems, seasonal wetland and ancient Hawaiian sites.

Weisler has been working with the Land Trust since 2009 to create an inventory of the known archeological sites in Mokio.

“There are no written records… only oral and later written testimony,” said Butch Haase, executive director of the Land Trust. “This is the component I’m personally most excited about… Marshall helping us piece this together with some historic accuracy.”

Weisler’s work with carbon dating and ancient native species identification has in turn aided the Land Trust toward getting a better picture of what the landscape used to look like.

“Once the environment gets trashed to this point, it’s almost impossible to recover unless you take an active hand,” said Weisler of the extent to which invasive species have taken over the scenery. “Everything you see now didn’t used to be here.”

The Land Trust has been encouraging students to visit Mokio to learn about the environmental restoration, and last week for the first time, shared Weisler’s work with a public site visit and evening lecture Saturday.

Molokai residents who joined Weisler and Land Trust staff on the tour of three sites will probably never look at rocks the same way.

One Response to “Stones with Stories”