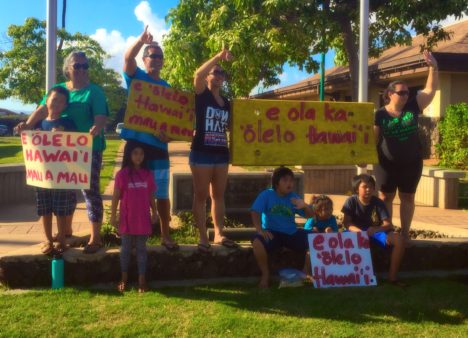 University of Hawaii professor Samuel Kaleikoa Ka`eo was issued a warrant for his arrest last week after he spoke only Hawaiian in court on Maui. Ka`eo appeared in connection to protesting construction of a Haleakala telescope, and when Judge Blaine Kobayashi asked Ka`eo to identify himself as present in the Wailuku District Court Wednesday,  Ka`eo did so in Hawaiian. The judge didn’t recognize his presence and asked three more times for Ka`eo to give his name, to which he responded each time in Hawaiian.

“The court is unable to get a definitive determination for the record that the defendant seated in court is Mr. Samuel Ka`eo,” Kobayashi said. The judge then issued him a bench warrant, frequently given when a defendant does not show up for their court date.

The court’s treatment of the right to speak `Olelo Hawaii has drawn a lot of criticism, and many gathered outside the court last Friday to stand for that right. Molokai’s Keani Rawlins-Fernandez, hearing of their plans, made a call to friends and family to do the same in solidarity on Molokai. They held signs in front of the Molokai state building on Friday afternoon.

“Judge Kobayashi’s actions on Wednesday spoke volumes on the judiciary’s views of our language, culture, and on us, as the native people of this place,” she said. “Pretending that Kaleikoa Ka`eo was not present in the courtroom, solely because he responded in Hawaiian, told us that we, as Kānaka ‘Ōiwi, don’t matter and that we are invisible to some who hold positions of power, eia na’e, eia nō mākou, ka Lāhui Hawai’i, ke ‘ōlelo nei i ka ‘Ōlelo Hawai’i me ka ha’aheo. E ola mau ka ‘Ōlelo Hawaii, the official language of this pae’āina.”

Ka`eo had previously been denied a translator because the prosecution said he was fluent in English and providing an interpreter would cause unnecessary cost and delays.

Hawaiian was made one of the state’s official language, along with English, in 1978. Most court cases are conducted in English, though interpreters are routinely provided for those who speak other languages.

The bench warrant was later recalled, but not before the State Judiciary said it will review its policies on Hawaiian language interpreters.

“Punishing Native Hawaiians for speaking our native language invokes a disturbing era in Hawaii’s history when `Olelo Hawaii was prohibited in schools, a form of cultural suppression that substantially contributed to the near extinction of the Hawaiian language,” said Office of Hawaiian Affairs CEO Kamana`opono Crabbe. “While this incident should have never occurred, it was a wake-up call for many in our community. That a Native Hawaiian was nearly arrested for speaking his mother tongue in 2018 indicates that despite the substantial progress made to revive the Hawaiian language over the years, we still have much further to go.”

In 2013, the State Legislature designated February as Mahina `Olelo Hawaii, or Hawaiian Language Month, to celebrate and encourage use of the language. The Dept. of Education, in recognition of the coming month, notes that throughout the state, 2,600 students are learning Hawaiian through the immersion program, and resurgence of the language continues as thousands of others are being exposed to the language and culture through classes, programs and events.