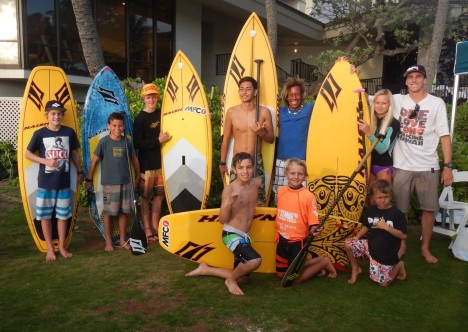 The opening of the Stand Up World Tour for 2015 was the Turtle Bay Women’s Pro along with the Na Kama Kai Youth Challenge leading to the main event, the Sunset Pro at Sunset Beach. Alex Mawae from Molokai had the experience of his young life with challenging conditions, big surf and being around kids who just ripped in the surf. The World Tour has always had the Na Kama Kai events added in for young and upcoming paddlers to attend. This year at Turtle Bay, the youth outnumbered the women with 20 youth competitors. The young paddlers came from as far as Holland, Tahiti, Puerto Rico, Maui, Oahu and Alex from Molokai.

The conditions were challenging with side shore winds, strong currents and six to 10-foot surf faces.  Saturday was a wash and Sunday the conditions cleaned up with lighter winds and easier to get to the outside. The youth division was split into two with the 14 to 16 category and 13 and under. Alex did awesome, taking the difficult conditions in his stride and catching waves of his life that have empowered him to another level. He did not make it to the finals but this event was not about winning, instead it was competing with likeminded kids in big surf.

In the 14 to 16 division, the youth took SUP paddling to a whole new level with these young riders planning to compete in the Sunset Pro’s first round of trials with a forecast of big surf on the horizon. David Nainoa from Tahiti stole the show in this 30 minute shootout, with two Maui boys, Jeffrey Spencer and Alohikea Kalalau, put on impressive performances.

In the Under 13 division, Keola Auwae absolutely ripped and became a huge inspiration for Alex and the other young kids in seeing what a 13 year old can do. The Turtle Bay event was an amazing experience for Alex and the other youth. All the youth that participated were incredibly talented and all wanting to win the event. This day was not for Alex when it came to winning. Instead this day was a growth spurt of confidence as Alex embarks on his new adventures with Stand Up paddling around the state.