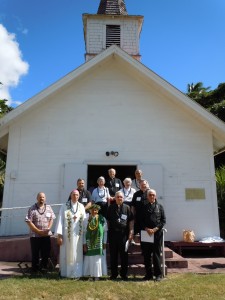 A group of dignitaries honoring St. Marianne’s relic at Our Lady of Seven Sorrows. Photo by Catherine Cluett

The newly canonized St. Marianne Cope “came home” last week, in the words of many Molokai parishioners, as her relic visited the island where she served Hansen’s disease patients in Kalaupapa for 30 years. Accompanied by Catholic dignitaries, bishops and Franciscan sisters, the relic — a bone fragment of St. Marianne — made several stops on Molokai last Friday. Prayer services were held at Our Lady of Seven Sorrows and St. Joseph’s chapels on the east end, with a mass at St. Damien Church in Kaunakakai followed by time for personal veneration.

“Today is a very special moment in our history as we welcome St. Marianne Cope back to our beautiful island,” said one parishioner during the service at Our Lady of Seven Sorrows. 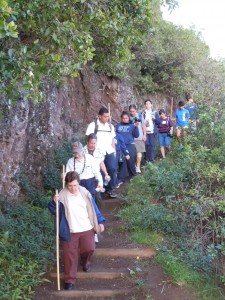 A group of Franciscan sisters, students from St. Francis High School on Oahu, and a few Molokai residents hiked with the relic down to Kalaupapa. Photo by Catherine Cluett

Saturday morning, four students from St. Francis High School on Oahu took turns carrying the relic down the pali trail to Kalaupapa, accompanied by several Franciscan sisters and Molokai residents. The youth were chosen out of about 500 students at the school based on essays they wrote. At the bottom of the trail, the group was met by the bishops, who flew into the settlement for the celebration.

“To me, she belongs here,” said parishioner Ida Reyes of St. Marianne’s relic’s visit. Reyes was one of several Molokai Catholics to pilgrimage to Rome to witness the canonization ceremony last month. “This is where she served, this is where she should be.” 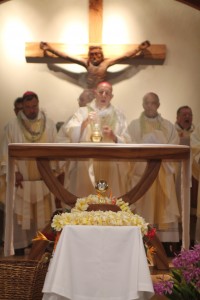