After a week of rain and wind, last Saturday’s sunny dawn was an auspicious start to a special day in Kalaupapa. Hundreds of friends and dignitaries from across the country, as well as community members, gathered to celebrate the sainthood of St. Marianne Cope. While festivities have been held in her honor around the world since her canonization in October, this event brought the celebration home to the place St. Marianne served exiled Hansen’s disease patients for 30 years.

“This day was a surprise,” smiled patient resident Gloria Marks, referring to both the weather and the reason for celebration. “This day is important because she [St. Marianne] is our second saint in Kalawao County.”

Kalawao is not only the smallest county in the U.S. but also home to Hawaii’s two saints. St. Damien de Veuster was canonized in October 2009, with St. Marianne following just two years later. Marks also spoke of the excitement of the events by adding that “they put Hawaii, and Kalawao County on the map.” 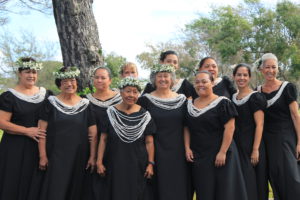 The celebration opened with hula performed by Na Wahine o Kalawao, a group of women that includes National Park Service (NPS) employees, patient residents and other community members. Guests were serenaded by the Iolani Hawaii Suzuki Strings Tour Group and the St. John Vianney Choir, both from Oahu, then joined together for a Catholic Mass, followed by a luau lunch. Throughout the day, community members and guests were invited to explore the settlement and visit various interpretive stations and exhibits to learn more about the settlement and its saints.

For those involved, the celebration could not come at a better time. Deacon Wally Mitsui, of St. John Apostle & Evangelist Church on Oahu, remembers St. Damien’s celebration fondly, but said the event happened too soon after the canonization. Many of the patients and community members who traveled to Rome to witness the occasion in person were too tired to fully enjoy the festivities back in Kalaupapa, he recalled.

Last weekend’s celebration also corresponded with an important date in St. Marianne’s life. January 23rd was her birthday as well as her Feast Day, a date assigned by the Catholic Church to honor and remember the life of the saint. 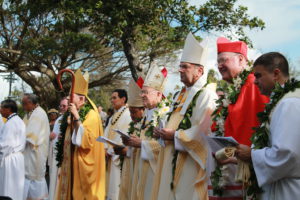 Catholic dignitaries from around the country gather before the celebratory Mass. Photo by Laura Pilz

For those who celebrated St. Marianne’s life in Kalaupapa last weekend, her example of service and sacrifice affects their lives in many ways. Many are inspired by her courage and compassion to those in need. Others often look to her for guidance.

“Her presence is still here even though her remains are not,” said resident Sister Theresa Chow. “She walked here, lived here, and took care of the patients here. Her spirit, her legacy remains.”