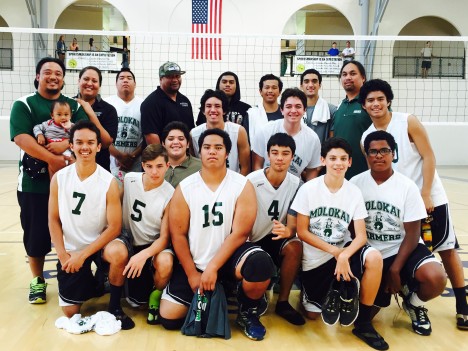 As seven Molokai High School sports teams gear up for the spring season — some with competition already under their belt — we complete a look at what’s in store for the teams in the months ahead.

The Molokai Boys Volleyball team is experienced this year with 12 returnees and six seniors on the team. Head Coach Hale Domingo said he is excited and has high hopes for this year’s team.

“I have heavy upperclassmen with this team, so I’m very lucky to have such an older team where they can control the practices as we’re trying to get everybody involved,” he said.

The team had a strong season opener last weekend, sweeping Seabury in two games for a 2-0 record.

The Farmers’ games are March 25-26 on Maui for a Division 1 and 2 shootout tournament and their first home game will be on April 1-2 against Lanai followed by a home match versus Hana on April 15-16. The MIL Boys Volleyball Tournament will be at on Molokai at The Barn this year on April 28-30. The state New City Nissan Boys Volleyball Championships MAY 4-6 at Kaimuki and Farrington High Schools and the Blaisdell Arena on Oahu.

The Molokai High School Golf Team is scheduled to play in the 72 hole individual MIL golf championship to played four straight Saturdays beginning in April. Head coach is Ted Tokuoka.  Returning golf team member is Junior Jershon Kaalekahi who has been working hard and preparing for the tournaments. Athletic Director Lee DeRouin hopes to get a few more players to join Jershon for the April matches. The MIL Individual Golf Championships will be held April 28-30 on Maui and the HHSAA David Ishii Foundation State Tournament is May 2-5 on Oahu.

Coach Maioho has high expectations for his athletes.

“We expect all students who participate in this sport to show good sportsmanship,” he said.  “This sport is very cultural and demands respect, discipline, self-control and good old fashioned hard work.”

Maioho said the sport can help many athletes. “Judo is a great sport that not only complements wrestling, but all sports that involve precise footwork and hip balance and control.”

Kori-Lee Derouin and Preston Pascua both placed first in the shot put at this past weekend’s third MIL meet of the season on Maui.