As seven Molokai High School sports teams gear up for the spring season, we’ll take a look at what’s ahead for them over the next two weeks. 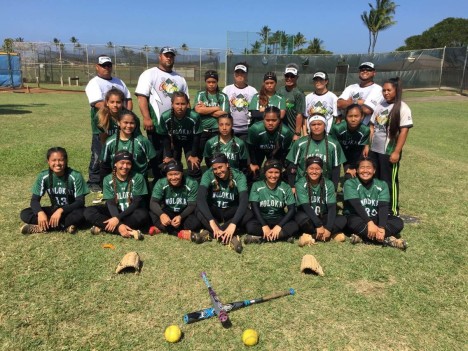 “We are excited to see what the future holds for this year’s softball team. We have a team of athletes!” said first year head coach Kawehi Horner. “We have simple expectations for these ladies that are attainable every day and are powered by their choice. It is simply for them to show up every day and do their best and everything will fall into place.”
The Lady Farmers started their preseason last weekend at The Lahainaluna Preseason Tournament and they split on Friday beating Waialua 7-5 and losing to Campbell 8-0. On Saturday they split also beating Kalaheo 13-6 and losing to Maui High 3-0. On Sunday, the Lady Farmers lost to Leilehua 14-0.
Their schedule this year consists of road games at Saint Anthony on March 18-19 and then three consecutive weekends of home stands against Seabury, Hana and Lanai. They will play the Trojans on March 25-26, the Dragons on April 1-2, and the Pine Lasses on April 8-9. All home games will be at their field up at the high school.
Assistant Coach this year is Kenny Adachi along with many volunteers, including Joe Yamamoto, Jasmine Kan-Hai,  Jolenta Duvachelle. Lloyd Yonemura and Walter Rawlins Sr.

Horner is excited for this season.
“My players are like sisters when they hit the field and it’s a place of smiles and sweat and laughter,” he said. “Everyone on the team is all stars and it’s their jobs to keep themselves there. I’m so excited and proud of what I see already.”
The MIL Girls Softball tournament will be held April 28-30 on Lanai this year and the HHSAA Girls Softball state tournament will be held on Maui this year May 11-14 at Patsy Mink Softball Stadium.
Tennis
The Molokai tennis team will be starting their season soon with their first away matches on March 4-5 against Saint Anthony on Maui. The first home match will be the following weekend March 11-12 against Maui Prep. The team will travel to Lahaina Luna on April 1-2 and then their last home match will be April 8-9 against Maui High.
First year Head Coach Kanahele Montizor has eight boys and eight girls participating this year and the team is led by two seniors, Oceana Madani and Keaa Davis.
“We have a lot of potential this year and hope to make a statement in the MIL this season” said Montizor.
Assistant coaches are Jimmy Casino, Pono Asano and Kamanu Pacua-Kahookano.
The MIL tournament will be held on April 21-23 on Maui and the state tournament for tennis will be May 5-7 on Oahu.
Baseball
The Molokai Boys Baseball team has begun their preseason play and will start on the road in league play March 11-12 on Maui against St. Anthony. The Farmers will also travel to Lanai March 17-19 and Maui again April 8-9 to play Seabury and St. Anthony. Their only home games this season are against Seabury on March 25-26 at Duke Maliu Field.
First year Head Coach Ilika Kaahanui has six seniors, seven juniors and nine sophomores on this year’s team.
“They are a good group of kids that are willing to work hard and they are very coachable” he said.
Team captains are Levi Horner Villa, Ena Victorino and Alden Abafo. Kaahanui is optimistic.
“Our goal for this season is to get the kids in condition mentally and physically and take it one game at a time and win or lose as long as they did their best,” he said.
Assistant coaches are Keahi Meyer and Ken Nakayama. Volunteer coaches are Apana Nakayama, Guillermo Dela Cruz, Nathan Horner and Solomon Maliu Jr. Ken Nakayama is a long time famous Molokai baseball coach who Ilika played under when he was in high school.
“It’s great to have Coach Ken back out here again and we are incorporating most of the drills that I used to do when I was playing for him in high school. He’s out there on the field every day teaching the kids the game of baseball that he loves so much and I am excited for the season,” Kaahanui said.
The MIL tournament will be held at Maehara Stadium on Maui April 21-23 and the HHSAA Boys Baseball State Tournament will be held May 5-7 at Wong Stadium in Hilo.