Sports Year Wraps Up with Banquet 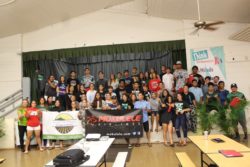 The accomplishments of this year’s Molokai High School student athletes were honored by the Athletic Department at their annual Athletic Recognition Banquet last Wednesday night at the MHS Cafeteria. After a nice roast pork dinner, served by Mikes Catering, all our student athletes and coaches were recognized by Athletic Director Lee DeRouin and his staff. The evening started off with the Parade of Athletes, in which all classes were recognized and athletes were introduced.

In a separate event earlier last week on Maui, eight Molokai student athletes were honored among this year’s Sports Spotlight Student Athletes, a program sponsored by Alexander and Baldwin. They were selected not only for their athletic ability but also their academic proficiency. The A&B Spotlight athletes this year were Camille Ledesma, Shai Rawlins, Kaydence Oswald-Kalawe, Shaelyn McCutcheon, Kaina Adolpho, Caele Manley, Ikua Deponte and Shraedon Naeole-Starkey, and they introduced their fellow Farmer athletes at Molokai’s banquet.

DeRouin wanted to express thanks to the Family and Friends of Agriculture for sponsoring this year’s banquet, and Mokulele Airlines and the Friends of Molokai High and Intermediate Schools along with all the many others who help to support Molokai High Athletics.

Fall sports will get started when the new school year begins in August, and we look forward to another successful sports year at Molokai High School. Imua Farmer Nation!