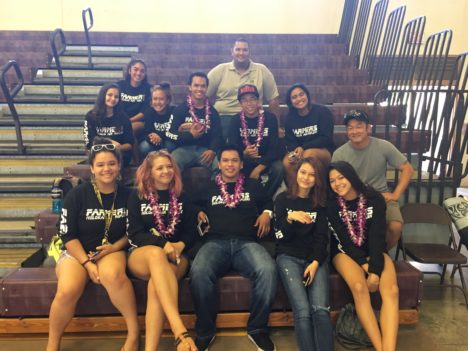 Head Coach Chinky Hubbard and his Air Riflery team of eight girls and three boys competed in the MIL Championships last Saturday at Baldwin High School. Molokai had a strong showing but senior Jershon Kaalekahi was the only shooter to advance to the Civilian Marksmanship Program Air Riflery Championships on Oct. 25 at the Neal Blaisdell Exhibition Hall. Kaalekahi finished in fifth place overall with a score of 488 points and had the best prone score of 187.

MHS Athletic Director Lee DeRouin was the League Coordinator for this year’s championships.

“Reflecting on our season, I am proud on how our team worked together, on and off the range,” said Hubbard. “We will now be focusing on Kaalekahi’s post season training for states.  Mahalo to our school, community and team families for all the support throughout our season.”

The Molokai eight-man football team has advanced to the MIL Championship game on Oct. 27th at War Memorial Stadium on Maui because the Hana Dragons had to forfeit this weekend’s semi-final game due to the lack of eligible players. The game was scheduled to be played here on Molokai on Oct. 22.

“It is unfortunate that Hana had to cancel and forfeit the upcoming playoff game,” said Head Coach Mike Kahale. “Our season is already short as it is, but these things our out of our control.  We will be looking forward to the Championship game… We’ll have some extra time to prepare and allow for a few of our guys who were banged up to get some extra treatment and rehab.  When the time comes, we should be ready to battle.”

Molokai will play the winner of the Lanai/Seabury semi-final this weekend in the Championship game. Molokai is 4-0 this season and defeated Seabury in last year’s Championship game 55-16 to claim is first MIL eight-man title.

The Lady Farmers are headed to Lanai this week for the MIL Girls Volleyball Championships. They will play the winner of St. Anthony/Seabury on Thursday Oct. 20 at 6:30 p.m. Molokai is 8-2 on the season and have won eight in a row and are the number two seed in the tournament. Their only losses are to number one seeded Hana, which is undefeated headed into the tournament. The MIL sends two teams to the State Tournament on Oct. 26 on Oahu so a win in the semi-final game on Thursday will clinch a State berth for the Farmers.

“I’m excited for the tournament,” said Head Coach Mahea Rawlins. “The girls are excited to and we just have to take it one point at a time. We’ve been working hard on ourselves and working together as a team. It’s a humbling experience and I’d like to say mahalo to all of Molokai for the support.”

The Boys and Girls Cross Country teams are headed to Maui this Saturday for the MIL Championships. Boys’ coach Mahina Hou Ross and girls’ coach Eugene Santiago have had the runners training hard for this weekend’s race at Kahului Community Center Field.