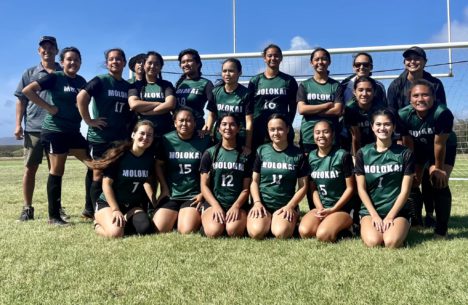 Soccer at Molokai High started up again in 2019, but it wasn’t until this year that the girls played Seabury Hall in Ho’olehua as an official MIL soccer game.

“We’re super excited to finally be a varsity program after many years in the making thanks to the commitment of plays coaches and the Molokai High Athletic department. We are hoping this is the beginning of many more years of girls’ high school soccer on Molokai,” said Matt Yamashita, head soccer coach.

The first game closed with a  score of 11 Seabury, Molokaon Friday. A rematch took place the next morning with a final of Seabury 10, Molokai 1.

“We knew this first set of games withs Seabury would be a huge learning opportunity for the players,” said Yamashita. “The coaches are super on how they played and improved between game one and two. We know that they will be ready for the next games.”

At the Kihei Aquatic Center this weekend, Head Swimming Coach Amanda Labriola took the Molokai swim team to their first meet of the season.

According to Labriola on a Molokai High Athletics Facebook post, Mauli Pupuhi took the previous school record in the 200 freestyle from Lenn Yonemura that was set in January of 2000. Pupuhi has qualified for states in the 50 and 100 freestyle swimming. He also tried a new event, the 100 breaststroke, and came in third overall, just two seconds from the state qualifying time.

Labriola said the team has a lot of new female swimmers this year and they made their mark.  Kaileena Harris Gramberg took three seconds off her 100 free time and Chloe Chaun dropped five seconds in her 100 free. Meredith Go got a personal best in her 50 free, and Kona Habon had some great times in both his 50 and 100 free.

Farmers Swimming will be back for another meet on January 7 at the Kihei Aquatic Center. 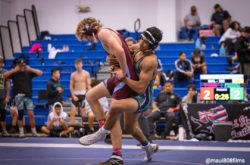