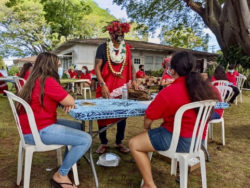 Dr. Moriba Jah does not look like the typical scientist because he has dreads, earrings and tattoos. Jah was born in San Francisco, California in 1971, March 23. At the age of two years, he moved to Venezuela. At the age of six, Jah studied at the Cap(f) Pedro Ma, Ochoa Morales National Guard military high school in Venezuela. After Jah graduated he moved back to the United States and went in the U.S. Air Force, where he served as a security guard. He studied Aerospace Engineering at Embry Riddle Aeronautical University in Prescott Arizona and earned his bachelor’s degree in 1999. Professor Ron Madler of Aerospace Engineering inspired Jah to become an Aerodynamicist as an undergraduate student, then Jah was awarded a NASA space grant which allowed him to investigate lunar gravity assist trajectories for Earth orbit plane changes. Then he spent a year at the Los Alamos National Laboratory working on space mission design.