Soon to be Cinder 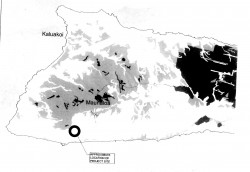 Cinder — a porous, low-density rock material — is used commonly on track and road surfaces and for landscaping. In high demand on Molokai, there’s currently no cinder harvesting operation on the island. That could change soon, however. Last week, Tri-L Construction was granted a permit that will allow them to operate the Waieli cinder pit in West Molokai.

The pit is located on 1.3 acres of state agricultural district land at Pu`u O Waieli, off the road to Hale O Lono in Maunaloa. After lengthy discussions over responsibility for maintenance of the access road, the Molokai Planning Commission approved Tri-L’s request for an extension of their special use permit to operate the pit. The seven-year extension corresponds to Tri-L’s lease agreement with land owner Molokai Ranch, which expires in 2020.

Maui County Planner Ben Sticka said Tri-L has been trying for several years to get the operation underway, and has not been extracting cinder during that time.

Tri-L President Darryl Leer said Maui County is requesting cinder for the Kaunakakai Baseball Park, and Molokai High and Kilohana schools are also waiting on the material — not to mention many homeowners.

Tri-L plans to begin harvesting in the pit in the next year or two, according to Leer. Operations would take place once a year, likely in the fall, so the company can maintain the road before the annual Molokai-to-Oahu canoe races leaving from Hale O Lono.

“We’re not going to be running it all year, every day,” he said, adding that grading the road during their operations once a year is more maintenance than the road currently receives. Regardless of what grading work Tri-L may do voluntarily, one of the conditions of the permit addresses maintenance of the road. The clause caused heated discussion at last Wednesday’s meeting about road ownership and liability that nearly put the permit on hold.

Road Maintenance
Leer described the road as “a can of worms.” According to commissioner Zhantell Dudoit, there was no public access on the road before a memorandum of agreement in 1997 between Molokai Ranch and the state Department of Land and Natural Resources. But the issue of liability and responsibility for maintenance has never been resolved.

“I’m concerned about maintenance of the road, and now we’re adding on another use for the road,” testified community member and former commissioner Lori Buchanan.

“I don’t understand how we can put a condition on the permit to maintain a road that is someone else’s property,” countered commissioner Diane Swenson.

But for Dudoit, her concern was not with who is liable, but in in the MoPC’s role of permitting a new use on the already-rough dirt road.

Leer said regardless of who is legally responsible, his company has to maintain the portion of road they utilize for safe traverse of their trucks.

“We’re maintaining the road out of the goodness of our heart – and for our trucks,” he said. “But we can’t be held liable for maintenance.”

Community testifiers called for clarity and communication with those who may hold liability.

“We should get all those responsible for the road to take part,” said Judy Caparida in her testimony supporting Tri-L’s operation.

“This small business owner should not bear the burden – we should find out who is responsible,” she said.

But responsibility for the road is not a simple matter, and Dudoit said if the commission waited for clarity on the matter, it could be years before the issue is resolved.

The Road Less Traveled
The state’s section of the road begins at the Molokai Ranch arena in Maunaloa and extends down to Hale O Lono. Tri-L would be using only a small portion of the main road from the arena, after which a separate access road runs to the quarry. Leer said no one travels that portion except Tri-L.

Commissioner Sherry Tancayo called the dispute “ridiculous,” adding that requiring Leer to maintain the road would be like telling a construction company they have to stop operation because they’re using heavy trucks on a state highway.

“A lot of things depend on this [approval] and if it keeps dragging out, we may just give up,” he said. “We’ve already invested an ungodly amount of money on this.”

Leer said Tri-L has already graded the road once, even though they haven’t used it yet.

In the end, a majority of planning commissioners voted to grant the permit.

The permit allows 15,150 cubic yards of red cinder to be extracted from a 1.3 acre area. Extension of the permit was granted for seven years, until Tri-L’s lease with Molokai Ranch expires. After that, Leer said he hopes to renew the agreement.