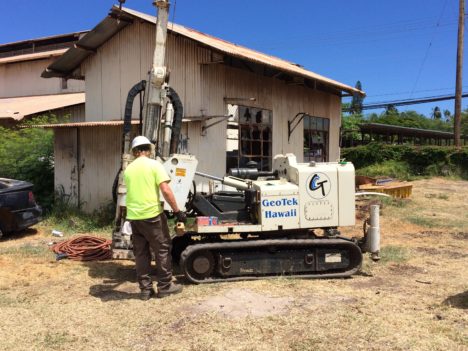 Many residents have noticed a crew working along the roadside in Kaunakakai lately between the parking lot behind Bank of Hawaii and Molokai Supply. They’re in the process of testing for underground contaminants in the soil left from the former Molokai Electric power plant. Maui Electric Company — which inherited the electric business but not the site — has spearheaded the effort and contracted Element Environmental to complete the testing.

The crew is using a small drilling rig to take many soil core samples at various depths, said Matt Neal, project manager and senior environmental scientist with Element Environmental. Soil is being collected from one foot below the surface down to groundwater level at a depth of five feet. In addition, a series of wells will test the groundwater and soil vapor — or gas — beneath the surface. Soil samples are being sent to the mainland for lab testing, and Neal said the first results should start to come back by next week.

Initial tests completed in recent years showed several toxic contaminants may be present, such as PCBs, which stands for polychlorinated biphenyl, petroleum and heavy metals.

Starting at the center of the site and working their way outward, the crew will be able to determine the source and extent of contamination.

“When we get the data back, it will determine if additional testing is needed outside of the original boundaries,” said Neal. Working with the Environmental Protection Agency (EPA), Hawaii Department of Health (DOH) and County of Maui, permits for testing were obtained for the primary area, a 1.5 acre parcel across from Paddlers Inn. A second permit was also secured to test surrounding areas if results indicate the contamination extends beyond the old Molokai Electric site property. Community meetings were held last year to inform residents of the plans.

Neal said testing began on schedule in the beginning of July, and is planned to wrap up by the beginning of August, though may extend longer. Based on observations from the samples taken so far, as well as resident testimony, it’s likely that the testing area will be expanded, to be confirmed by lab results, he said.

After testing is complete, Maui Electric will work with the community to plan a cleanup of the site to remove any contamination.

Anyone with questions about the project can contact Maui Electric’s Mahina Martin at 808-872-3529 or mahina.martin@mauielectric.com.