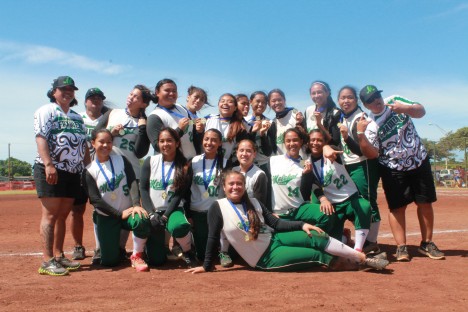 The Lady Farmers’ softball team is headed to states after defeating the Lanai Pinelasses last weekend in an exciting, close win at Duke Maliu Regional Park.

Homes runs and a killer comeback led Molokai to 12-11 victory against Lanai last Saturday. The win claimed the Farmers the Maui Interscholastic League (MIL) Division II Championship crown. The team is already thinking ahead to the State Tournament on Oahu May 6-9.

Molokai High School (MHS) freshman centerfielder and pitcher Brooke Keliihoomalu said “it’s indescribable” to be going to state her first year on the team. She said she and her teammates will give it their all at the State Tournament. Teammate and MHS senior outfielder, Caylee Ledesma, said it felt great to win the championship game after a rough start to the season.

“After losing our first season game 23-6 and getting smashed…it was great to come back and win and become season champs,” she said.

Ledesma said she looks forward to coming back harder than last year at the State Tournament.

“It felt great to win my last game before state,” she said. “I hope to do better than last year [at state] where we got out in the first inning. We’re going to play hard.”

The Lady Farmers were down in the bottom of the sixth inning 4-8. As the Pinelasses maintained the lead, the score went up 7-11 and Molokai fans started to cheer louder against the bubbling raucous of the Lanai fan base. Molokai caught up and tied the game 11-11 at the top of the seventh inning. They continued their rally throughout the inning, not letting up on defense or offense, and by the bottom of the seventh inning Molokai topped Lanai with an unsuspected 12-11 triumph. The Pinelasses placed second and also earned a berth to the State Tournament.

Molokai Head Coach Coco Augustiro said Waipuna Kelly-Paleka, MHS junior third base came through at the bottom of the seventh inning with a base hit to score the winning home run.

“It feels great because last season during my sophomore year I tore my ACL and was out for the whole season, so it’s great to be back and to win,” said Kelly-Paleka. “I’m excited and ready for state and this is my first time going…I have faith in my team.”

Augustiro said most of all, she’s proud of the girls.

“It feels real good to win the championship game and be heading to state.” Augustiro said. “The girls did it. Mahalo to all the coaches, the girls, their families and all of the supporters out there.”

On Thursday, the Farmers beat Seabury 16-3 in six innings in the first round of four-team playoffs in the regular season. Later that day, they defeated Lanai 15-14 at the bottom of the seventh inning. The Lady Farmers finished with a regular season title and an 8-3 record.

During the first day of the MIL DII Championship tournament on Friday, Molokai beat Seabury by a landslide 16-1 in four innings during the second semi-final game, propelling them to play Lanai for the title on Saturday.

This is the second consecutive year MHS has won the MIL Championship and made it to states. It’s also the first time in five years that the MIL championship games have been held on Molokai. The location of the games rotates every year among MIL schools.

Augustiro said it’s important to have the games held periodically on Molokai because it creates a community support system for school athletics.

The state tournament will be held May 6 – 9 at Central Oahu Regional Park & Rainbow Wahine Softball Stadium.