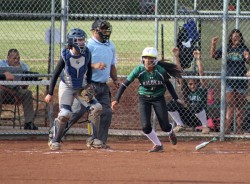 Nadia Augustiro takes off after smacking a base hit. Photo by Colleen Uechi.

The Molokai girls’ softball field may be brand new, but the path to home plate is already well worn by the cleats of the high-scoring Farmers.

It was the Farmers’ first and final series on their new home field, which was officially blessed on March 20.

“I’ve practiced here before, but this year, having a game and having everyone from the community and our parents coming to watch us, it just felt really exciting, and I felt really honored,” said senior Kelsie Espiritu-Tanabe.

With the victories, Molokai’s girls claimed the regular season championship and guaranteed themselves a place at the state tournament.

On Friday, Espiritu-Tanabe and freshman Camille Ledesma scored two runs apiece, while junior pitcher Kysha Kawano struck out six and allowed just one hit. The team worked 13 total bases on balls out of Trojan pitcher Mindy Santos and scored the final run on a bases-loaded walk.

On Saturday, junior Tai Yamamoto blasted a grand slam out of the new ballpark as the Farmers poured in 14 first-inning runs. Senior pitcher Kiona English tossed a no-hitter, and seniors Waipuna Kelly-Paleka and Saydee Makaiwi each scored four times in what was the Senior Day game.

“They bring the fire to our team,” said junior Kapua Lee of the team’s four seniors. “They pick us up when we’re down. [I’ll miss] all the funny things they say.” 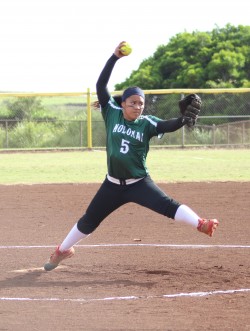 Coach Coco Augustiro said they were able to give many bench players game time in preparation for this week’s Maui Interscholastic League (MIL) championships.

“Our team goal is to get all our players up to the same level, because our theory is our team is as strong as our weakest person on the bench,” she said.

Molokai heads to MILs this weekend and then to states May 12-15.

“We’re preparing with our A-game,” said Augustiro. “With the girls playing so well we can move on to more signals and different plays. We’re working extra hard .”