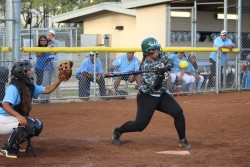 However, this year’s team wrote a different story. Despite falling 14-2 to St. Francis last Tuesday, the Lady Farmers turned around and beat Kalaheo 14-3 on Thursday and Konawaena 13-3 on Friday in the consolation bracket. Molokai finished seventh in the state.

“With my team I realized that the only way we do good is if we pick each other up and just have fun,” said outfielder Saydee Makaiwi. “Whenever we fall short, no matter how far away the score is we always fight back hard. … We don’t end the game till the ump says it’s over.”

After scoring the game’s first run, the Farmers gave up eight in the bottom of the first. Molokai scratched out a second run on a St. Francis error, but the Saints responded with six runs to end the game in five innings.

“This pitcher is faster than what we usually face, so that was one of our biggest challenges, is catching up to the pitches and getting good hits,” said infielder Khaylie Adachi-Kawamae, who singled in the second.

However, Molokai, a team that averaged 13.5 runs a game this year, brought the offense roaring back against Kalaheo. 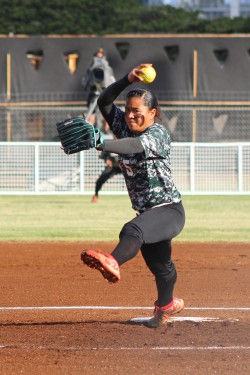 “As long as we get our hits, we can do better,” said outfielder Sydney Rawlins.

The Farmers did just that, piling up 11 hits on an error-plagued Kalaheo to take a 14-1 lead after four innings. They sealed the game in the fourth, when the whole Molokai order came up to bat and scored seven runs on five hits. Catcher Tai Yamamoto and third baseman Waipuna Kelly-Paleka both scored twice in the game, while centerfielder Brooke Keliihoomalu and second baseman Kapua Lee had three runs apiece.

“We know our nemesis has been for centuries our pitching,” said assistant coach Melveena Starkey. “We knew we could play defense. We knew we could hit. But it was all about the pitching.”

Kawano had her best outing in the team’s final game against Konawaena, pitching six innings with no earned runs. However, defensive errors allowed the Wildcats to score three on the Farmers, and going into the bottom of the fifth, Molokai led 5-3. Then the power-hitting Yamamoto belted a two-run homer that Head Coach Coco Augustiro said managed to “light up the fire,” triggering a five-run Farmer scoring spree. Molokai added three in the sixth the put the game out of reach. Yamamoto finished 3-for-3 with two runs and three RBI. Lee and Keliihoomalu also batted 3-for-3.

“Their bats came around. They just started taking off,” said Augustiro. “It was a fast game.”

Keliihoomalu and Lee were major offensive contributors throughout the tournament. Lee was 5-for-7 with a team-leading seven runs in three games. Keliihoomalu hit 5-for-6 with five runs, two RBI and two stolen bases. Throughout the tournament, the Farmers were also able to deploy all of their bench players, including clutch-hitting outfielder Nadia Augustiro, who drove in runs in both appearances.

“Everybody got to play. That’s rare in the state tournament,” said Coco. “Our saying was always our team is as strong as our weakest link.” 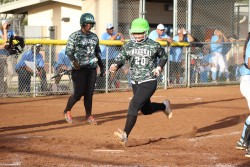 Molokai finished at 10-4 in a season in which they debuted their brand new softball field. The Lady Farmers sneaked past Lanai to first place in the standings with a win on the final day of the regular season, though the Pine Lasses later beat them in the MIL championships. After this season, the Farmers say goodbye to seniors Kelly-Paleka, Makaiwi, utility player Kiona English and first baseman Kelsie Espiritu-Tanabe.

“These girls, the one thing about them is the whole season they played from behind against Lanai,” said Starkey. “… They never hung their [heads] and threw in their glove. They always battled.”