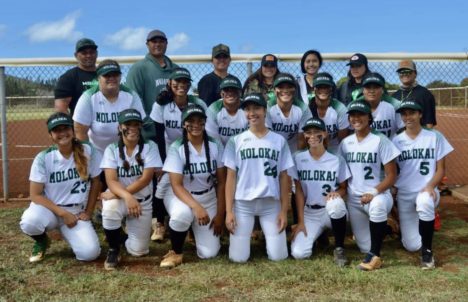 In a nailbiter tie that was called to an end by darkness, the Molokai High Softball team hosted Lanai at home last weekend. Friday’s game was recorded as a 16-16 tie after the sixth inning.

“Our Lady Farmers did great this weekend, and although the outcome was not what we expected it to be these young ladies gained valuable game experience,” said Coach Kalei Pastrana. “Either we win or we learn, and our Lady Famers worked hard and we are happy to see the progress that they’ve made, as they continue to trust in the process and allow themselves to grow in the sport of softball.”

Saturday’s game celebrated the team’s only senior as her last home game.

“For our senior, Lia Chae Meyer, as coaches we are so grateful for her willingness to play and have fun, she is a talented student athlete and coachable player, who excels greatly because of her determination and love for sports and respect for all players and coaches,” continued Pastrana. “When faced with challenging tasks Lia-Chae tackles them with the best of her abilities and always puts in her best efforts each and every day.”