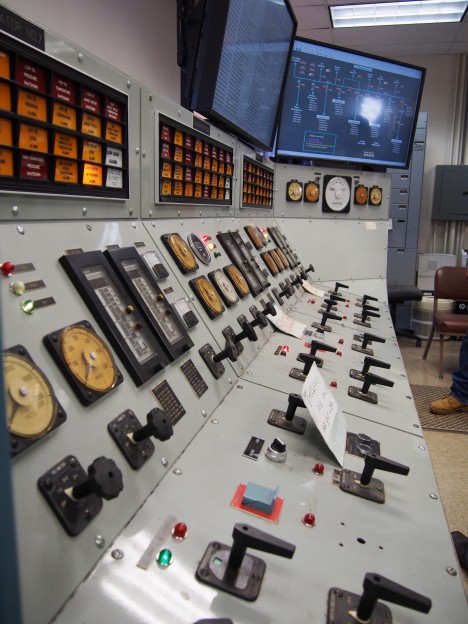 At Molokai’s Maui Electric Pala`au Power Plant, there’s a room filled with panels of switches, dials and screens. There, an operator who works 24/7, keeping Molokai’s lights on. There’s a constant hum inside the control room from the plant’s 13 huge diesel generators.

“We’re attuned to this noise,” said electrician Brian Tachibana. “If it changes at all, these guys will pick it up.”

Slight changes in frequency could mean a drop or surge in power, which require minute adjustments in settings by the operator.

They also watch the clocks – not so they can tell when their eight-hour shift is up, but as a way to monitor the frequency being generated. The electric frequency carried by utility lines in the U.S. is set to 60 Hertz (Hz), and electronic clocks are synced with that frequency to maintain accuracy. If the clocks start running fast or slow, operators know they have to adjust the generators, said Tachibana.

It’s a job that requires constant micro-adjustments to respond to influxes in electricity generated by residential solar panels and dozens of other variables.

“They’re the heart of our business,” said Maui Electric President Sharon Suzuki of the company’s crew.

Tachibana said the largest single load draw on Molokai’s electric grid is the 500-horsepower Kaluakoi water pump that is run on a schedule. It draws so much power that Tachibana said if residents notice their lights occasionally dim around 10 p.m., it’s probably the pump turning on.

Operators said in the event of an outage, alarms sound in the control room. That’s usually when the phones also start ringing.

“We have to stabilize the system before answering phones,” said operator Todd Tamanaha. “First we have to determine if [the problem] is inside [the plant] or outside [on a line].”

While operators monitor all the power lines on a SCADA (supervisory control and data acquisition) system — a map of the entire Molokai grid displayed on a screen — that will usually indicate when there’s an outage, calling to report an outage is important.

“Sometimes we don’t know the power is out until you call us,” said Joe Kentz, manager of Maui Electric’s transmission and distribution department, adding that’s especially the case when only a few residents are affected.

Much of what’s involved in keeping the lights on is making tiny adjustments, and  sometimes it’s also small things that can cause the biggest problems.

In January, Maui Electric officials held meetings with Molokai residents to discuss a series of island-wide power outages that baffled even the experts.

“I’ve been in this industry for 43 years and I’ve always been able to find the cause of a problem,” Kentz told customers. “[But this time] we really can’t explain what’s going on.”

Maui Electric employees checked lines from the air and from the ground, cut vegetation, and inspectors came to evaluate the entire system — all to no avail. Finally, Kentz said, the company brought in a generator consultant to check every generator at the power plant. During those inspections, a Maui Electric technician from Maui found a damaged wire inside one of the connectors.

“One broken wire on one little connector to the generator… would take down the whole system without the alarms going off,” Kentz told residents at a follow-up meeting last week. “It was a small problem but one that took a long time to find.”

He said after changing the connector, the system has been running well since February.

“It’s an ongoing challenge, but things are working better and we think reliability is where it should be,” Kentz added.

When there is a problem with the electric grid and the frequency drops or rises too much, the system is designed to “load shed” — or shut off circuits to different areas of the island — in order to recover more quickly. The east end circuit used to be designed to load shed first, leaving residents with frequent power outages. At January’s meeting, one resident suggested that load shedding be more fairly distributed so east end residents wouldn’t always take the hit.

Kentz said last week that they took that suggestion to heart and now the east end circuit won’t always be the first to lose power when the grid is compromised.

As with the last set of meetings, residents shared concerns about poor communication during outages to help Molokai customers better respond appropriately.

Suzuki asked that residents call the company’s toll-free number, 1-877-871-8461, to both report outages and receive the latest information. Customers can also sign up for email or text notifications through Maui County by visiting mauielectric.com.

Suzuki said the company is considering utilizing an outage management system to better communicate with customers, but is also trying to balance operation costs to avoid electric bill increases.

“We do take efforts to lower rates,” she said. “Fuel is 50 percent of the bill [and that’s rising.] Twelve percent are our operating and maintenance costs and we do try to be more efficient… We are trying, and we appreciate your support.”

One Response to “Small Changes for Better Electric Service”