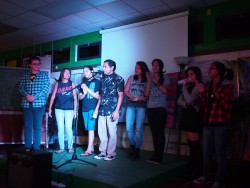 Emcee Melvin Won Pat-Borja (at microphone) of Pacific Tongues with Molokai students after the competition. Photo by Catherine Cluett.

Emotions were raw and honesty took a front seat at a poetry slam at Molokai High School last week. Youth used their tongues to bear their souls in a form of spoken word performances known as slam poetry, having been guided in the art for several days by visiting national champion slam poets.

A group of poet facilitators from Pacific Tongues, a nonprofit dedicated to fostering spoken word arts for Pacific Islanders, spent last Monday, Tuesday and Wednesday at Molokai Middle and High school. They visited classrooms, held workshops, did writing exercises and inspired students with their own verbal prowess.

Their visit was made possible through a grant written by several Molokai High teachers following the group’s first visit to the island last year. Maile and Hano Naehu, local slam poets, organized the island’s first ever slam competition around this time last year, said Maile, and the grant allowed the Pacific Tongues poets to return and take things a step further.

“[Hano and Maile] mentioned the people of Molokai have fire in them, and it’s so evident,” said Harrison Ines, a poet facilitator and international slam poet champion. “The youth here are so much more raw… honest and fearless from the get-go. As a poet facilitator, that’s really inspiring to see.”

Following the group’s three-day visit this year, students competed in a competition that had big stakes: a chance to compete at the Youth Speaks Hawaii Grand Slam Finals on Oahu on April 4.

Judges from both Molokai and Pacific Tongues scored each of the nearly dozen student performances last Wednesday. Molokai High sophomore Jacob Norris became the evening’s champion with an emotional performance of a slam reflecting on his family and self-esteem.

And while the score dictated who would represent Molokai at the state competition, Pacific Tongues’ Melvin Won Pat-Borja, who emceed the event, emphasized slam is about much more than that.

“As we always say, ‘the point is not the point, the point is the poetry,’” he said. “We’re going to find a way to talk to our young people and this is it.”

Fear of acceptance, insufficiency and being alone all surfaced as themes of the student slams, often concluded with statements of growing strength and self-worth. Social injustice and racism also came to the forefront, as youth addressed the challenges they face in society and finding the strength to face them and even offer solutions.

“Spread the word, spread the feeling, spread the thought that we need healing,” was a repetitive chant in the slam performed by seventh grader Kapili`ula Naehu.

For others, it was an opportunity to overcome shyness and push themselves to face a crowd.

Eighth-grader Cameryn Kahalewai said this was a way to help her reach her career goals.

“I really want to go into public and human services,” she said. “I know I’m really shy so [through this] I was able to grow and come out and become more open.”

Kahalewai wrote her slam earlier that day, and said the facilitators helped her through writing exercises and encouragement. 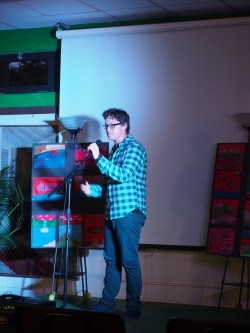 Molokai’s Jacob Norris will represent the school at the state competition this weekend. Photo by Catherine Cluett.

She said she originally wrote the slam she performed last fall, with the guidance of her mother Maile.

“Sometimes poems just hit me,” she said. “A lot of times, it’s in the mornings.”

Norris will go to Oahu this weekend for the state event, as well as a shot to participate in a national slam competition, mentored by Pacific Tongues poets.

Last year’s inaugural Molokai slam competition winner in the high school division, `Apelila Ritte-Camara-Tangonan, will be representing Molokai along with Norris at the state competition.

Maile said she and Hano accompanied the poet facilitators during their visit and hope to take slam poetry to the next level on Molokai.

“[We] shadowed them and learned more tools so that when they do leave, we can start a slam poetry club or team here, which is what they encouraged us to do,” she said. “We really want to have consistent Molokai team represented at the state competition every year.”