At Hawaii’s state wrestling championships last weekend, 432 wrestlers from nearly 50 schools competed in 780 bouts over the course of two days.

Molokai athletes refused to get lost in the crowd. 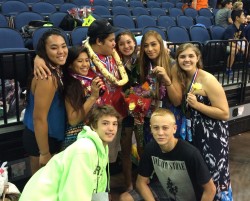 Despite the staggering load of state-level competition, six of the 11 Farmer wrestlers who hit the mats emerged with medals, which are earned by finishing in the top six in a weight class. Molokai’s top finisher was runner-up Alexandria Simon, who challenged a world title-winning wrestler in the 132-pound championship final.

“It’s crazy and you know that you’re one of the best in the state just making it there, because you know all the people around you are dedicated to the sport,” said Molokai junior Cendall Manley. “…It’s an individual sport but you feel the collective energy.”

“This was one of the toughest state tournaments we had as far as the level of competition,” said Head Coach Randy Manley, who’s been coaching at the high school for 11 years. “… Any time we have kids that walk away with a state medal around their neck, that’s a pretty satisfied feeling.”

As a team, the girls finished eighth out of 48 schools, while the boys tied for 24th place out of 46.

Simon, a three-time state qualifier, worked her way into the championship finals against Kamehameha-Kapalama’s Teshya Alo, a national and international titleholder. Despite a shoulder injury, Simon held fast against Alo’s attempts to flip her and forced the match into the second round, which no other wrestler had been able to do against Alo in the tournament. Alo finally pinned Simon, but Simon’s silver medal surpassed a target she set before the competition.

“Before we started the tournament, we all shared our goals,” said Han. “For Alex, hers was to at least place sixth. … By sharing our goals I think we build each other up … ‘cause now we know what each other wants and we can specifically help each other in that area.”

Pico toughed out a loss to Alo’s equally accomplished sister Teniya Alo in the semifinals. However, Coach Manley said he was proud to see how wrestlers like Pico and Corpuz bounced back after defeats. In the consolation finals, Corpuz pinned Hilo’s Kaitlyn Funai, while Pico beat Kapolei’s Allie Mahoe in a 6-3 decision.

“Sometimes it’s hard to come back in the consolation round and wrestle with the same intensity,” said Coach Manley. “It was really good for them as seniors to be able to go out like that.”

Ten Farmers won at least one match during the tournament, including freshmen wrestlers Caele Manley and Martika English. Four Farmers lost to wrestlers who would eventually become state champions.

Cendall Manley lost to a state champion but twice pinned Nanakuli’s Tyzandria Wells, who earlier had upset the top seed in their weight class.

“She was a really good match. When I ended up pinning her in the third period, it was amazing! I felt so excited I started crying,” said Cendall, who made the state semifinals for the first time. “… Everybody was screaming afterwards. I couldn’t believe that I won that match.”

The Farmers’ fastest victory came from Makaiwi and Pico in the preliminary rounds, as both secured a pinfall in 37 seconds. By contrast, the longest was Han’s triple overtime contest against Kamehameha-Kapalama’s Makoa Gaughen-Haili, which Han won in a 3-2 decision.

“I started out rough, but towards the end I came out calm and I was able to get that last point,” said Han. “That was one of the biggest things throughout the season [for me]. … I would sometimes get too nervous. But I felt like I was calm and I was in control.”

Rounding out Molokai’s state team were sophomore Juaquin Samaniego (106) and senior Kailaoe Cabanting (117), both of made it to the championship quarterfinals, as well as junior Jasmyn Davis (168), who was defeated in the consolation rounds. Lahainaluna swept both the boys’ and girls’ team crowns on Saturday, becoming the first neighbor island school to ever win a state team wrestling championship. Molokai faced Lahainaluna each week, which Coach Manley said “no doubt” prepared them for states.

The state tournament was the last competition for seniors Pico, Makaiwi, Corpuz and Cabanting. Senior Sonny Balbas will also leave the boys’ team. Every senior won a title during the regular season.

Molokai, though smaller than other schools at the state level, has a strong support system that showed over the weekend, said Han.

“Without a shadow of a doubt, without my team, I wouldn’t have been able to do it,” he said. “We have such a small team, we don’t make that much noise, but just knowing that there’s someone else there cheering for you is great.”