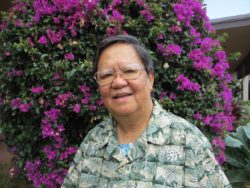 In 2009, Sister was part of the group that founded a Sacred Hearts community at St. Damien Parish in Kaunakakai, Molokai, endearing herself to the people as parish secretary, religious educator and enthusiastic volunteer.  Due to failing health, Sister Jessie and the other Sisters of the Molokai community returned to Honolulu in March, 2022.

Sister Jessie is survived by her sisters Regina (Otto) Furlow, Pauline Weddle, Diane and Victoria Kai and three brothers Herbert (Ingrid) Kai, Thomas and Paul Kai and numerous nieces and nephews.  She was preceded in death by her parents Herbert A. Kai and Regina (Aiu) Kai and her brother, the Reverend Walter K. Kai.

Truly a woman of Aloha, Sister Jessie will be missed by all who knew her and loved her.