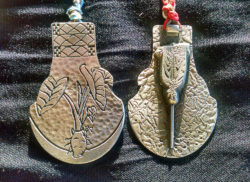 As arms were raised to declare champions, medals were awarded for their great accomplishments shown on the field at Ka Molokai Makahiki 2018. In the early years of Makahiki, various types of Hawaiian art — model koa canoes, paintings, `umeke, ipu wai, poi boards, feathered kahili  — were given as awards, followed by certificates, T-shirts, and,  more recently, medals created by artists from Molokai Heritage Company.  Last year’s medal was a pohaku ku`i `ai, a poi pounder, to remind us of our kuleana to keep Haloa (kalo) thriving by planting, harvesting, pounding and sharing that which sustained us for hundreds of years.