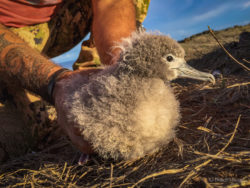 For the first time in years — maybe decades, maybe centuries, no one’s quite sure — fuzzy Uʻau kani, or Wedgetailed Shearwater, chicks hatched in the Anapuka area within Mokio Preserve. The successful nesting of the indigenous seabirds indicates that the past 12 years of work of the Molokai Land Trust is paying off and the native ecosystem is recovering, as crews clear acres of dense kiawe and remove deer, cats and mongoose.

Adult Uʻau kani have gray-brown and white feathers, a long, hooked beak and a wingspan of more than three feet. Clumsy on land, the birds live most of their lives on the wing at sea, and come onshore only to breed. These Hawaiian birds date back 70 million years, according to biologists.

Mo’omomi has one of the largest nesting populations in the state, but Mokio has had no chicks hatch in the more than a decade MLT has been working in the area — and likely years before that, said Josiah Ching, MLT project coordinator.

“We had two repeated attempts [to nest at Anapuka] in the past couple years but the adults were killed by cats before they laid eggs,” said Ching.

Since then, Ching and his small crew have redoubled efforts to keep cats out of the area, as well as deer that damage the ecosystem and trample the bird’s underground nesting burrows.

“A lot of that area was covered in kiawe canopy so it was impossible for the birds to get to the ground to make their burrows,” he explained. “We’re just putting pieces of the puzzle back together. I feel like the land wouldn’t be responding in the way that it is if the work wasn’t working.”

Not only is their work reflected in a healthier ecosystem and growth of native plant species, Ching said seeing the return of Uʻau kani represents a cultural link that was missing for many.
“One of the really fascinating things is the cultural aspect — we as Hawaiians lost the cultural connection we had with these birds because many of us grew up not having any sort of relationship with them,” he said. “[Now there’s an] opportunity for future generations to develop the cultural connection that had been lost.”

Ching said habitat loss and predation from nonnative mammals are among the main reasons for the shearwaters’ population decrease and “why most of us knew nothing about these birds growing up.”

Studies have also been done showing that areas with thriving seabird populations nesting on the shoreline improves the biodiversity of marine life through the birds’ guano fertilizing limu and feeding diverse fish species.

“It [the birds] really is a huge missing link to the nearshore marine ecosystem,” said Ching. 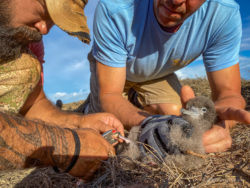 Placing identification bands on the legs of nesting U’au kani and chicks began in Maui County in 2000, and since then, biologists have learned more about the birds’ habits — and the environmental health of their nesting areas — from documenting individuals’ annual return to the land, according to Jay Penniman, project manager of the Maui Nui Seabird Recovery Project.

Ua`u kani are largely monogamous, taking one breeding partner during their 35 to 40-year lifespan. They normally come back to breed in the same location they hatched as a chick.
This is one of the aspects that biologists are using the bands to study: some birds will start new nesting areas, said Penniman. That’s how Mo`omomi — and now Anapuka — got started as colonies on Molokai.

After mating, U’au kani male and female pairs go back out to sea and the female will come back to the burrow in early June to lay a single egg. She immediately goes back out to feed, while the male takes the first turn incubating the egg, said Penniman. After two weeks, she comes back and they trade off while he eats. The chick hatches 52 days later and the adults take turns for a day or two at a time feeding and staying with the chick. When the chick is just a week old, the parents leave it by itself for up to a week at a time while they forage at sea and bring food back for their young. Penniman said GPS tracking shows that adults will travel up to 250 miles out to sea during this time.

Chicks stay in the burrow for 120 days, and when they leave, they’re fully feathered and ready for a life at sea. They won’t return to land for five to six years until they’re ready to breed themselves.

Though the birds occasionally land on the water, Penniman said the majority of their lives are on the wing — even when they sleep.

For Ching and MLT field tech Maverick Kaulia Delacruz, the two chicks that just left Anapuka as young adults last week are almost like their own babies. And if it wasn’t for their efforts, the chicks probably wouldn’t have made it. 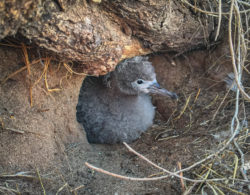 As the fluffy chicks slept snug in their burrows, Ching watched a cat they had been trying to trap without success patrol the area on a critter cam video.

“We caught the same cat on camera right at the mouth of the burrow,” Ching said. “We even spent two nights sleeping in the colonies with the birds to try to get the cat.”

They eventually did manage to trap it, saving the chicks from certain demise.

“It’s been pretty amazing to develop that connection with those two chicks from finding them for the first time and being blown away excited and seeing the cat right there and realizing the birds had been trying for so long [to nest] and being unsuccessful and realizing how close we are to losing it all — it’s scary almost,” he said. “The immediate threat of being completely wiped out — that’s why we had to go down there and spend time — there’s no other way to make sure the colony survived…. It’s pretty amazing to play a small role in that process and redevelop that connection with these birds for ourselves firsthand.”

Ching said he’d be “ecstatic” to see those two chicks they banded come back in six years to raise their own young.

With that goal in mind, he said they’ll continue their efforts to make Mokio a successful nesting ground, and gave a nod to the efforts of the staff and volunteers working before him that paved the way for the chicks to hatch. He encouraged community members and volunteers to get involved in MLT’s work as well.

“I’m not doing the work I’m doing for myself, I’m doing it for the community, for the ‘aina, for the generations that come after us, because it needs to be done,” said Ching. “That’s how all of us feel, that’s why we go to these extremes.”