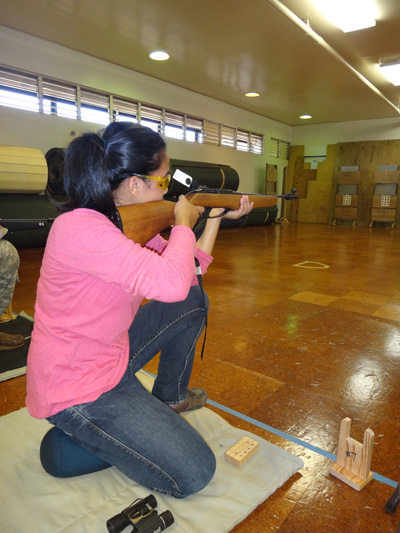 Crouched on one knee, rifle pressed firmly into her right shoulder, Molokai High School (MHS) senior Mariah Kalipi remembers to breathe as she focuses in on a paper target 33 feet in front of her. Her left arm rests on her left knee, the fingers of her right hand pressed gently on the trigger, ready. Her eyes never stray from the target as she takes a deep but steady breath and fires.

Though Kalipi has been handling guns as long as she can remember, this is only her second year shooting with the MHS air riflery team. She is the team captain of the four-member girls team, with eight on the boys team. At this season’s first meet on Maui on Sept. 22, Kalipi placed third out of 36 shooters in the league.

“We look at state scores and we aim for those,” said Kalipi. “It’s a high standard we set for ourselves, but I know we can do it.” 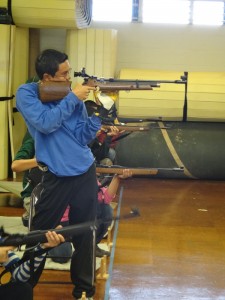 For the first time in its 22-year history, the MHS team will host its first Maui Interscholastic League (MIL) air riflery meet at the Barn at 8 a.m. this Saturday morning. Schools from across the county will come to participate in the second MIL meet of this season.

With the hunting lifestyle characteristic of Molokai, most kids will have held a gun by the time they reach high school, according to Eddie Gorospe, who has coached air riflery at MHS for the past three years. Air riflery is a way to not only improve their shot, but also to teach youth how to handle a gun properly, he said.

“It’s not just about shooting a gun,” explained Gorospe. “It helps them understand safety, to have a positive attitude…how to motivate themselves to not fail [both] here and in the real world.”

The team practices every day after school for upwards of two hours, and it involves more than just shooting at a target. In addition to alternating between the three different shooting positions –prone, or lying down, standing and kneeling –practice involves running laps, doing push-ups and other conditioning drills. The students’ hard work has paid off — in 2010, the girls’ team, led by Junior-at-the-time Kayla Matson, took home the MIL Championship. Last year, both the girls’ team and boys’ team, led by Senior-at-the-time James Corpuz, placed second in the league.

This year’s boys’ team captain Michael Corpuz, sophomore, insists that the secret to 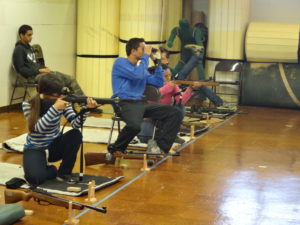 shooting accurately is to “just relax and let go.” At last year’s MIL championships, he was the second highest scorer on the team behind his brother James. In addition to practicing with the team afterschool every day, he said his dad, assistant coach Henry Corpuz, makes him shoot at home for an additional two hours or so. With all his hard work, he said he is very excited for MHS’ first home meet.

“A lot of kids on the island don’t know about air riflery,” said Gorospe. “So the kids we have now are ambassadors of the sport.” He hopes the home meet this Saturday will generate enough support and awareness from the community to hopefully sponsor a club during the summertime to help prepare students for the season.

The next home meet is not anticipated until 2014, as the agreement between MIL schools now alternates each year between hosting one home meet on Molokai and one at Hana. Gorospe hopes in the future to secure at least one home meet every year, and also to set up a consistent 12-girl and 12-boy team.

For now, both he and the students are looking forward to this weekend’s competition.
“This is our turf, so I want them to come out hungry, and they are,” said Gorospe. “I just want them to show people of Molokai what air riflery is all about and get people interested.”