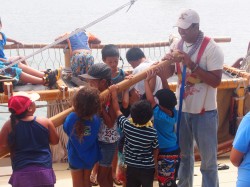 Last week, nearly 500 Molokai residents, students and visitors got the chance to step foot on the Hokulea — a replica of the traditional Hawaiian double-hulled sailing canoe — docked at the Kaunakakai Wharf. The vessel is touring Hawaii before embarking on a three-year Worldwide Voyage that will span three years, 46,000 miles, 21 countries and at least 65 landfalls.

More than 20 crew members — some of whom are from Molokai — sailed the Hokulea from Lanai on Monday, July 8. During the Worldwide Voyage, an average crew of 12 to 15 will navigate the canoe on its journey as ambassadors of the aloha spirit and spreading a message of care for the environment.

“When you come on board, [the crew] becomes your family,” said Molokai captain Mel Paoa.

Molokai crew members like Kawika Crivello gave tours to youth groups throughout the week. Crivello told keiki one of the most common questions is, “Where do you use the bathroom?” He said crew members wear a safety harness whenever they’re outside the canoe’s rails. Clipping in his harness onto tight ropes along the canoe’s side, he demonstrated the technique to lean off the canoe to “do your business.”

Crew take turns sleeping in snug compartments underneath the rails. With no refrigeration on board, they rely on fresh fish and canned food, getting fresh produce whenever they can at ports along the way. Solar panels power an emergency radio and communication equipment so students around the world can track the progress of the Hokulea’s voyage.

Marks in the wood along the navigator’s seats on either side of the canoe measure the sunrise, sunset, moonrise, moon set and movement of the stars. If it’s overcast, Paoa said navigators use birds or the ocean swells as guides.

“A master navigator can read five or six different swells — you don’t need your eyes open, you can feel the rhythm,” he said.

Ka`iulani Murphy, a student navigator and captain from Waimea who will be participating on the Worldwide Voyage, said famed navigator Nainoa Thompson has developed a navigation system that’s a marriage of traditional and modern techniques. Using a scientific understanding of the stars, he has adapted traditional navigator Mau Piailug used “star paths” to guide vessels across the ocean.

Ten-year-old Rosie of Molokai said she thinks one of the coolest things about the Hokulea is the use of starts to navigate. For Shia-Anne, 12, it’s the fact that the canoe will sail around the world.

“She is everyone’s canoe,” Murphy said of the Hokulea. “We will carry everyone’s aloha and mana with us wherever we go.”

The Hokulea left Molokai on Monday for Hawaii Island.