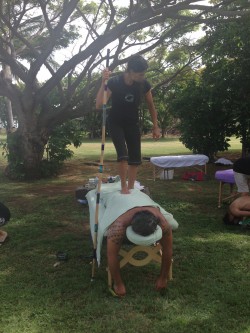 Under the breezy shade of blooming tress and the soothing sound of buzzing bees, dozens of Molokai community members were treated to 50-minute treatments. The healing massage therapy was made possible by Ho`omana Spa Maui, which facilitated the visit of the therapists.

“We’re all here to aloha everyone and part of the lomi lifestyle is about giving back,” said Jeana Iwalani Naluai, spa owner and international instructor of lomi lomi massage. “It’s not just a technique this is a way of life, and it’s always been ohana work.”

Lomi lomi is an ancient Hawaiian healing art that has been practiced for hundreds of years by practitioners and kupuna, Naluai said. Therapists assist clients in body alignment with rhythmic movements using their forearms, palms, fingers, elbows, knees, feet and sometime sticks and stones.

The massage therapists begin a lomi lomi session by placing their hands gently on the body and remaining still for a few moments and then massaging in long, flowing, dance-like strokes. Additionally, spiritual chants, prayers and guided meditation may be incorporated.

Over the last few months, therapists were able to fundraise for this community outreach event by running a lomi-thon on Maui. Local businesses and community members on Maui donated roughly $1200 to bring therapists to Molokai to offer lomi lomi therapy, Naluai said. The mission is to “share aloha with our Hawaiian community and our Molokai brothers and sisters,” she added.

Community outreach is a huge aspect of Ho`omana Spa and each therapist must complete 38 hours of volunteer service a year and organize one outreach event. 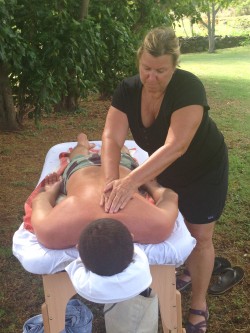 Two years ago Justin Kekiwi, a massage therapist student and Molokai native, was awarded the Ho`omana Spa Maui’s Native Hawaiian Scholarship to attend their year-long training to obtain his Hawaii massage license. As part of his community service hours, Kekiwi jumped on the opportunity to give back to Molokai and with this service project event.

“Lomi is different. It’s Hawaiian and it’s deeper than massage. There are many layers of spiritual aspects and it helps a lot of people,” Kekiwi said. “Now, we’re going to share it around the world and with anyone who wants to receive it.”

After noticing a lack of Native Hawaiians in her classes at the spa, Naluai started offering a scholarship program in 2009 specifically for Native Hawaiian students interested in learning and practicing lomi lomi. The scholarship allows 10 students a year with five every session in the fall or spring season. To date, she’s had four students enrolled each year.

“They learn how to not only connect with the muscles but with the bones because Hawaiians believe that’s where your mana is, that’s where your life force is, and that’s where your whole soul, lineage and story is held,” Naluai said.
For Kekiwi, the scholarship program has been “life changing” and said he wants to continue healing and spreading the aloha of lomi lomi on all the islands.

“It was a treat to not only have them here giving back to the community, but to show them the fishpond and sustainable living on Molokai,” said local host coordinator Hanohano Naehu.  “This is such a treat and a blessing.” 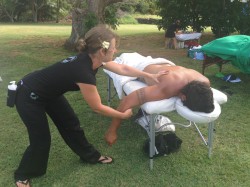 Keawanui Fishpond is more than a fishpond, but a sustainable place to practice Hawaiian activities and to embrace the Hawaiian culture, Naehu said. That is why he partnered with Kekiwi to offer the fishpond as the site for the community service project.

“There are some activities that we can do today that link us directly to our ancestors,” Naehu said. “One is lomi lomi. Doing or receiving it is like working the fishpond; I’m receiving what my kupuna received. My body is getting fixed in a Hawaiian way.”

Ho`omana Spa Maui will host another outreach event on Maui in December and on Kauai at the beginning of next year.