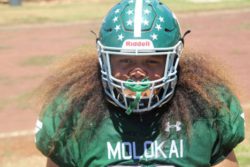 Molokai High School graduate Vaai “Uso” Seumalo is on a mission. Last week Seumalo verbally committed to Kansas State University, accepting a football scholarship to the school, where he plans to finish his associate degree in the spring. Since graduating from MHS in 2020, he’s been at Garden City Community College in Kansas. However, the 6-foot-4, 325-pound defensive lineman has been on the radar for Kansas State since he arrived in the state.

He’ll be the first ever NCAA Division I scholarship football player from Molokai High’s football program.

Seumalo is very humbled by his trail-blazing journey and the road is just getting better and better.

“It is a blessing to be able to continue my athletic and academic career at a NCAA Division 1 school, especially one like Kansas State,” he said. “Being able to play football is an amazing blessing and it wouldn’t have been possible without God, and my family and friends back home! Thank you to everyone who supported me along this journey, and I want you to know nothing goes unseen! You can do anything you put your mind to, and anything is possible. Mahalo Molokai!”

Seumalo will finish his junior college career with the Garden City Broncbusters in a Dec. 4 game against Navarro College.

“I’m so proud of Uso and all of his efforts. It is no small task to leave the comfort and lifestyle of Molokai and go 4,000 miles away to play college football,” said Kahale. “He stepped out of his comfort zone, pursued a dream, worked hard, and it has paid off. Earning a D1 football scholarship at Kansas State is a big achievement. K-State is a premier program in the Big 12, a Power 5 conference.”

“I had several conversations with K-State’s DL coach Mike Tuiasosopo as he was recruiting Uso,” said Kahale. “He saw his potential on film and just needed to get him on campus to do a workout.  Uso did not disappoint.  They were really impressed with his footwork and athleticism and made him an offer.”

“This is so exciting, obviously for Uso and his family, but also for our program,” said Kahale. “One more Molokai athlete setting an example for the next generation kids and a very inspiring story, indeed.”