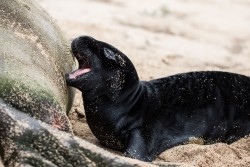 This black-coated baby is the first Hawaiian monk seal of the season born on Papaloa Beach, Kalaupapa last week.  Researchers don’t yet know whether it’s a boy or a girl. The mother, named RV06 by scientists, was also born in Kalaupapa in 2005, said Diane Pike, Molokai response coordinator for the Monk Seal Foundation.

Last year, RV06’s pup died after three days, but so far this year, mother and pup seem to be doing fine, Pike said.

Most of Molokai’s monk seal births occur in Kalaupapa because it offers a safe and protected environment, and birthing season is usually between March and June. Monk seals usually come to their place of birth to have their own pups, like RV06, said Pike.