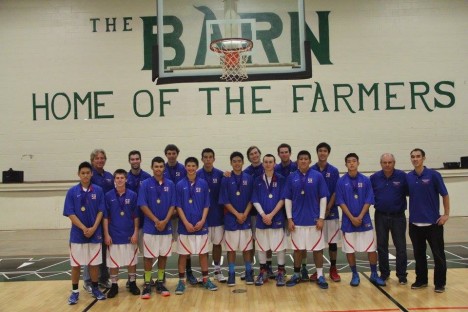 The Spartans (10-0) clinched the league’s lone berth to the D-II state tournament and won their 32nd straight MIL game.

The Spartans led by just one point at halftime, 26-25. They outscored the Pine Lads 24-15 in the fourth quarter.

“My team played their hearts off,” said Fernandez. “They remember the disappointment of losing in the final the last three years but they believed they could do it tonight. I believed in them also.”

Fernandez is looking forward to next year but is “going to miss my seniors.”

“We have seven seniors, but we need to keep doing what we did this year and hopefully we can get back to the championship game next year and win it,” he said.

Seabury will play in the state tournament next week in Honolulu.

“It’s going to be a battle, but we will be going hard in practice this week and I know the guys are ready,” said Prather. “If we are going to make a run, now is the time, and I am excited.”

Both coaches commented on the tournament being held on Molokai this year. Prather said the home team “did a great job of hosting us, and it was a well-run tournament.”

“The tournament being on Molokai this year was very special to us because we feel at home here,” Fernandez added. “The crowd, the gym, the mana that we feel here is so powerful over here and the boys recognized that as soon as they stepped off the plane.”