Last week, a Molokai grown Boy Scout returned to his roots to help the island’s youth. While on spring break from Kamehameha-Kapalama (KSK), high school senior Rusty “Naholowaa” Nakayama and a group of fellow Boy Scouts came home to build stand-up paddleboard racks as part of Nakayama’s quest to become an Eagle Scout.

“I’m not only doing this to get my Eagle, but it is satisfactory to give back to the community,” said Nakayama.

The racks will hold boards for Youth in Motion (YIM), a local nonprofit focused on getting kids involved in ocean sports. A group of visitors from a California paddling organization called Kelp Farmer noticed many paddling events are connected to Molokai and recently decided to donate 29 boards to YIM, said Clare Mawae, YIM’s chairman and director. However, with no place to store the boards, Mawae often had to cart them from her house for the 15 kids who come for weekly paddling lessons. Nakayama’s sister participates in YIM, and the senior said he noticed the nonprofit’s need for paddleboard racks.

“Once this is up there, it will help bring more people out,” said Nakayama. “It will increase the time of their lesson and help them … not expend so much energy and time into just moving [boards].”

By last week, they’d planted two large wooden posts and a rack of welded pipes near the canoe shack by the wharf in Kaunakakai. The racks need a coating of rust protection paint as well as foam padding before they can support boards. Many of the parts were donated by Maui County’s Public Works Department, said Nakayama’s dad, Wade. Mawae added that the racks should be completely finished by the beginning of next week. 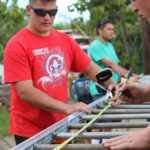 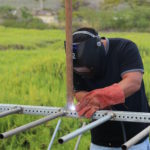 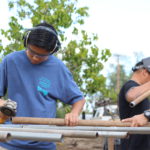 Ninth grader Kai Kalani grinds down poles for the racks.

“He’s doing something positive for the community. Youth in Motion is trying to do something with the kids. It’s a win-win situation,” said Mawae, who added the best part is that the racks are built by kids, for kids.

The project was also a learning experience for the scouts. Wade does hobby welding and taught the boys basic welding techniques to help them earn their merit badges.

“You never know when you’re gonna need it,” said Kai Kalani, a KSK freshman and Boy Scout, who is also from Molokai. “[I enjoy] knowing that it benefits other people, like the kids.”

Nakayama said he thinks ocean activities are a great way for kids to stay active and added he’s happy to encourage “whatever people want to do to stay healthy.” Once the racks are done, families who are paying members of YIM can check out the boards, said Mawae. She added that these racks will have better security, as one board was already stolen recently.

Throughout his scouting experience, Nakayama said he’s learned a lot beyond the practical skills necessary for merit badges.

“I’m glad I have the opportunity to be in scouting because it has opened my mind to certain things, like being a community leader and a community giver,” he said.