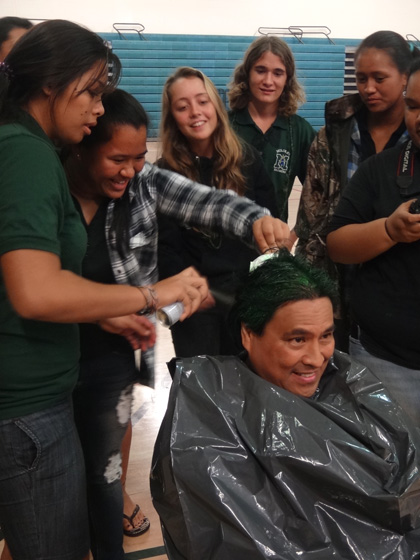 MHS Principal Stan Hao let students spray his hair green for the day because they improved in both math and reading portions of last year’s HSA tests. Photo by Eileen Chao

Molokai High School (MHS) Principal Stan Hao may have looked like his usual self when he showed up for school last Thursday morning, but by lunchtime, he was sporting a flashy new look –spiky, green hair. At the start of last school year, Hao promised MHS students that if they reached Adequate Yearly Progress (AYP) standards, he would dye his hair green for the day in front of the entire school. Though MHS did not technically meet AYP standards due to a shortfall in graduation rates, their double digit gains in both the math and reading portions of the Hawaii State Assessment (HSA) last year were noteworthy.

“[The students who took the HSA last year] made the scores, we just had one element that didn’t –our graduation rate –but [they] had nothing to do with that,” said Hao, right before he let a group of juniors from the class of 2014 spray paint his hair green at an assembly held in the Barn last Thursday.

The WASC accreditation recognizes schools that meet an acceptable level of quality in accordance with WASC criteria, according to its website. Less than half of the schools in all of Hawaii are able to claim this honor.

“Congratulations…this is the same accreditation that Punahou High and Miilani [High] and all those other private schools aspire to,” said Horner. “This school is as good as any school in the entire state of Hawaii.”

Horner also commended MHS for graduating 100 percent of ninth and 10th grade last year, which is more than any other school in the state, he said.

The students’ significant gains in the previous year’s HSA scores –13 percent in reading and 21 percent in math—are a big accomplishment for any public school. Last year, MHS started a partnership with EdisonLearning company, an organization that helps public schools that are struggling to meet national testing standards. They work with 391 schools in 25 states and three countries, and out of those, only five schools could boast double-digit improvements in both math and reading. Three of those were on Molokai – Kilohana Elementary, Molokai Middle School and MHS.

Hao promised current sophomores that if they surpassed last year’s scores, he would dye his hair again next year, this time for a week.

Five MHS seniors who have already been accepted into post-high school institutions were also recognized at the assembly, as well as a number of students with grade point averages (GPAs) of 4.0 or higher who received Principal’s Honors. Leading the school is senior Michael Kikukawa with a GPA of 4.333.

“There is only one high school on Molokai…so when you achieve, we all celebrate, including your community, your family, the faculty,” said Machado. “Today is about celebrating all of your achievements, and you’re not even finished for the school year yet.”