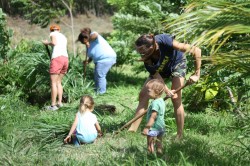 A national program is planting seeds for growing healthier youth and nutritional cafeteria lunches on Molokai one school at a time.

FoodCorps, a nonprofit program newly introduced to the island last month, works to address childhood obesity in underserved areas. FoodCorps partners with the AmeriCorps service network and currently operates in 15 states, According to a Kohala Center press release, an academic institute for environmental science research and education as well as the and host site for Hawaii’s FoodCorps Program. Hawaii, California and New Jersey were added to their 2013-2014 service plan.

Out of 1,000 applicants from around the country, eight youths were selected to serve Hawaii’s public and charter schools, according to Nancy Redfeather, program director of the Hawaii Island School Garden Network (HISGN) and host site supervisor of FoodCorps Hawaii. Their objectives are to teach children about growing their own food, build and maintain school gardens, and collaborate with local farms to introduce quality lunches to school cafeterias.

Two FoodCorps service members are working on Molokai this year — Lacey Phifer, a Molokai local and current biology student at University of Hawaii Maui College, Molokai, and Simon Mendes, a recent English graduate from Boston University. They are focusing their efforts on Molokai High School (MHS), Molokai Middle School (MMS) and Maunaloa Elementary School. According to the press release, schools selected needed to be committed to constructing garden-based nutritional education programs, as well as increasing their hands-on learning and core curriculum connections.

“We have a school-wide focus on sustainability,” said Maunaloa Elementary School Principal Joe Yamamoto. “We know [setting up the gardens] will take a while… but everything is slowly falling in its place and it should be exciting for the kids.”

FoodCorps is partnering with Sust`ainable Molokai, a nonprofit that works with the community to find modern strategies for sustainability while adhering to cultural traditions. The last month has been about building relationships and collaborating with school administrators, teachers and farmers, said Phifer.

Getting Gardens into Schools
Phifer said they have begun building raised garden beds at MMS for any teacher interested to incorporate gardens in their class.

“Our challenge on Molokai is getting teachers and parents involved,” she said. Because teachers have no time for extra activities during the school day, Phifer said they offer to give classes short lessons incorporating subjects such as math, science, and history into gardening.

Their first math lesson was last Friday to a seventh grade class. Mendes said they divided the garden beds into 12 sections and worked with fractions and percentages to plant basil, green onions, tomatoes and carrots.

“The kids seem like they really want to do it,” said Phifer. “Even if they had never eaten the vegetable before, they saw it being planted and know that they can eat it later and that’s the coolest thing ever.”

For MHS, FoodCorps will work with an existing food forest, a garden that mimics a woodland ecosystem but instead uses edible trees, shrubs, perennials and annuals. According to school garden coordinator Fred Richardson, though the garden was created two years ago, he is still trying to get more students interested and involved.

“What we’re really trying to do here is work with students and show them that this is something that really works,” said Richardson.

FoodCorps will also try to provide Maunaloa with raised garden beds, however with tight budgets, there isn’t any wiggle room for extra spending.

Along with writing grants and receiving donations, Mendes said they have been considering introducing the school to the Fresh Fruits and Vegetable Program (FFVP) — a federal program that provides free fresh fruits and vegetables to students in schools with high reduced lunch percentage rates — as another way to get produce into the school.

“We just want to introduce the kids to more vegetables,” said Mendes.

Challenges in the Cafeteria
The ultimate goal of FoodCorps is to get the food produced in school gardens and local farms onto cafeteria tables, but strict Department of Education (DOE) regulations restrict the use of any food that hasn’t been U.S. Department of Agriculture (USDA) certified.

Local, state and national organizations are working with legislation to make local produce available to students, and Mendes said the process is long and arduous.

“What I want is like back in the days, Molokai High School had their own sustainable living,” said Phifer. “They had their own dairy farm, their own agriculture land, and they provided the school with their own food. They could put food in the cafeteria, they could sell their milk to the community, and now it’s illegal to have that.  So my mission is to bring it back.”

Community Outreach
FoodCorps held their first community workday last Saturday at the MHS agriculture field to get the community more involved with gardening. Volunteers helped weed the area and planted a variety of vegetables such as pumpkins, squash, radishes, broccoli, and carrots.

“I thought it went really well,” said Mendes. “The people who came were really excited
and I hope we can get more people involved next time.”

Harmonee Williams, development director for Sust`ainable Molokai, said FoodCorps plans to schedule a workday every fourth Saturday of the month in addition to their work during the school day.

“It’s exciting to hear what they’re planning and it’s what our office dreams about doing,” said Williams. “To hear them on the ground talking about what they’re going to be doing with the kids and planting gardens, it’s exciting.”

One Response to “Schools Harvest for Health”