Molokai’s intellectual all-stars claimed the spotlight as they competed in the trivia show “It’s Academic Hawaii.” With a director, live audience and a hair and makeup crew, the Molokai High School (MHS) team got in front of the camera to show the state their brain power.

MHS teacher Lisa Takata took students Alex Gilliand, Michael Kikukawa, Cara Connoly and Robert Onofrio to Oahu April 19, where KFVE Hawaii News Now crews filmed their competition against Mililani High School and Sacred Hearts Academy at Dave and Busters. Their episode will air on KFVE June 24 at 7 p.m.  Until then, it’s under wraps if the MHS team will make it to the semifinals. The championship game airs July 29. 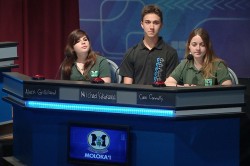 “It’s Academic” puts the spotlight on high school students who excel academically – and can withstand the pressures of high-paced trivia as they compete against other academic achievers from private and public schools across the state.

“‘It’s Academic’ is designed to bring the kind of acclaim generally reserved for sports heroes to the arena of academic achievement,” states a KFVE press release about the show.

“These kids will face challenging questions that most adults would have trouble with,” said Hawaii News Now anchor Keahi Tucker, who hosted the show and delivered the questions to the contestants. “Strategy and timing matter as much as the right answers, and you can be sure this is going to be a battle to the end.”

Takata chose the team out of nine students who tried out after she applied for MHS to be on the show. When she found out the school was accepted to compete, she posted a notice for students that she was looking for competitors.

Takata said the four MHS contestants were nervous arriving on the set and competing. They weren’t given any study guides, and they didn’t know what types of questions would be asked.

“There ended up being a lot of social studies questions,” she said. “Government, politics – those types of questions… But the kids do well in their social studies classes.”

Other quiz topics include math, science, history, geography, literature, sports, current events and Hawaiian language and culture, according to the show’s press release.

The MHS team had two weeks to prepare before they headed to the competition. Takata said they used trivia apps on iPhones and watched previous “It’s Academic” shows.

Takata said the show covered air and ground transportation as well as lunch that day, which was one of the reasons why MHS participated. They did not have to raise funds to go to Oahu and compete.

“This is a wonderful way to highlight the academic talents of our students,” said Abercrombie, who also makes appearances to ask questions via video. “We look forward to watching Hawaii’s bright and gifted students compete in this fun and educational television quiz show.”

“It’s Academic” marked its 52nd season of Washington, D.C. competitions this year, and this is the second year KFVE has ran the show in Hawaii with local high school students.

“It was absolutely fun, just the experience of being on a set,” Takata said.