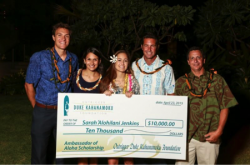 A collection of Hawaii’s most talented scholar athletes gathered today at Outrigger Canoe Club to accept scholarship funds from the Outrigger Duke Kahanamoku Foundation. The nonprofit awarded a total of $178,250 to 29 grantees and 44 scholarships to student athletes from 34 different high schools across six Hawaiian Islands.

Each year, the Foundation awards a $10,000 Ambassador of Aloha Scholarship to one individual that exemplifies outstanding skill and leadership in the classroom, in their chosen sport and in the community.

Sarah `Alohilani Jenkins was named the 2015 Outrigger Duke Kahanamoku Ambassador of Aloha. With a GPA exceeding 4.0, Sarah graduated from Molokai High School’s class of 2015 and will be attending Duke University this fall. As valedictorian, Sarah was ranked number one in her graduating class and is highly regarded on campus for her academic achievements, her leadership abilities and her hundreds of volunteer hours dedicated to her community. Among her most noted accomplishments is the extensive study she conducted on the adverse effects of Red Mangrove on Molokai’s shorelines and reefs.

Since its inception in 1986, the Outrigger Duke Kahanamoku Foundation has gifted more than $2.3 million dollars to scholar athletes and nonprofit organizations in Hawaii that embody what Duke believed in and stood for: education, athleticism, and the aloha spirit.

The Foundation is best known for its public events, such as Duke’s OceanFest and the Waterman Hall of Fame, but its core mission is to provide financial assistance for the college education of Hawaii’s students and helping local athletes compete. Both team and individual grants are given for “Duke Sports,” including: canoeing, swimming, surfing, kayaking, water polo and volleyball.

Duke Kahanamoku passed away in 1968, but his impact in the islands lives on. Kama`aina and visitors alike can list his hallmarks: an Olympic athlete, a Hollywood star with a humble attitude, sheriff of Honolulu, the father of modern surfing, the original Ambassador of Aloha.