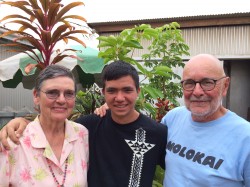 Young Molokai entrepreneur Elijah Kaneshiro, now 20, created a recipe for salad dressing when he was eight. At 10, he went into commercial business, marketing his product at Outpost Natural Foods, Bamboo Pantry (now closed) and by special order.

That’s how part-time Molokai residents Donald and Joanna Sunshine know Elijah. Donald recounts their meeting in his book “Life’s Moments,” describing with humor how Joanna began talking with the 10-year-old, who he describes as personable, smart and articulate. Donald writes that he assumes Elijah has sold many bottles to such endeared and unsuspecting ladies. The story ends with Joanna buying three of Elijah’s $20 bottles of salad dressing, much to Donald’s adoring annoyance (he concludes by admitting the dressing is pretty good).

But the story doesn’t end there. Elijah, having finished high school, moved to the mainland and then to Oahu, where he got his pilot’s license. In January of 2013, he traveled to Bolivia, planning to work as a mission pilot.

“But they didn’t have planes,” explains Elijah, “and you can’t be a pilot without planes.”

So instead, he taught English to Spanish-speaking students, knowing only a few words of Spanish himself. He described the experience as a challenge, navigating the language barriers.

In October, he returned to Oahu and worked for UPS. A few weeks ago, he came home to Molokai for a visit.

In the meantime, Elijah’s mother, Brenda, had read Donald’s book and the story of the meeting over salad dressing. When he got home, she encouraged Elijah to call Donald and Joanna. He looked for their number in Virginia, where they spend half the year, but finally tracked them down on Molokai.

Joanna answered the phone. She couldn’t believe who was on the line.

“Stop what you’re doing and pick up the phone,” she called to Donald. “This is Elijah who made the salad dressing.”

Ten years after their first meeting, Donald, Joanna and Elijah arranged a reunion and sat down to chat on Molokai.

“It was wonderful to hear from him,” says Joanna.

True to Donald’s suspicions, Elijah says he had many such interactions while selling his products and doesn’t remember their original encounter. But the reunion went as naturally as their meeting, and they enjoyed a conversation outsiders would have thought was between old friends.

Elijah recalls his labor-intensive business, peeling 250 cloves of garlic by hand per batch of salad dressing. He says he slowed down by age 16, but hopes to get back into the business someday.

But he’s currently preoccupied with another goal. He’s working toward his commercial pilot’s license and is thinking of buying a small plane with a friend. As an entrepreneur, he’s already thought of ways to make his plan financially feasible. He says he’s eventually hoping to work for a local airline.

Having started a popular business at age 10, the Sunshines say they have no doubt he’ll be successful no matter what.