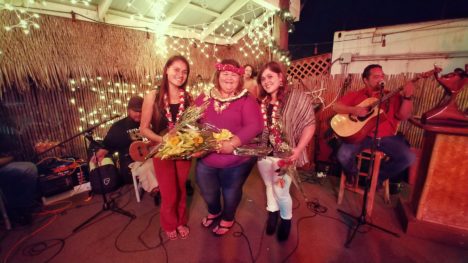 After five consecutive Wednesdays of music and entertainment, the final evening of Molokai Idol at an overcrowded Paddlers Restaurant came down to three contestants Dec. 13. At the end of the night, Jessica Sakurada walked away with the 1st place trophy and $1,000.

“I just want you close where you can stay forever. You can be sure that it will only get better,” Sakurada sang in her impeccable cover of Alicia Keys’ “No One” to win the hearts – and the votes – of the public and the judges.

Runner up Esther Torres-Umi said she loves old-school music, and delivered a flawless performance of Etha James’ “Something’s Got a Hold on Me.”

“The judge set the bar high,” second runner-up Melia Kalawe said prior to deliver a heartfelt version of Natural Vibes’ “Put Some Time on the Clock.”

The bar may have been high, but none of the contestants disappointed, making the job of choosing the winner quite difficult. The judges took three criteria into consideration: entertainment, stage presence and vocals. Their vote was combined with the votes from an audience of more than 300.

Sakurada may have taken the first-place trophy home, but just like master of ceremonies Kealoha Hooper said, everyone was a winner that night. And that included the audience.

“It’s so local, it’s so Molokai,” said Cindy Thompson, a visitor from Oregon who bought a condo on the island 10 years ago, and keeps coming back here year after year. “That’s what I love about Molokai. All the people love each other, all the families are here. It makes you feel like family.”

Following the traditional Hawaiian entertainment style immortalized by musicians such as the late Don Ho, the evening was as much about music as it was about making everyone feel at home, with a good dash of humor. When Sakurada took a few extra seconds to get onstage, Hooper seized the opportunity for a joke.

“Always take you long time! How come? You was in the bathroom?” Hooper joked in a strong Hawaiian Pidgin.

At the end of the evening, it was anyone’s guess who would take the win. It had been five Wednesdays of music and fun, with 10 original contestants – with ages ranging from the early 20 to the late 50s – putting their hearts and souls onstage.

“This is nerve-wrecking; the results are here on this paper,” Hooper said right before disclosing the ballots.

The final decision only brought the three contestants even closer. They had performed together earlier in the evening. When Hooper announced Sakurada as the winner, they all hugged in an emotional moment.

“The concept (of Molokai Idol) is to bring the community together and to promote Molokai,” Hooper said, adding the event was originally supposed to be annual, but it was so successful that it will now be seasonal.