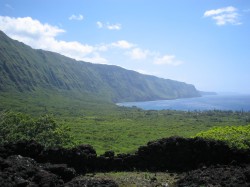 Ancient rock formations left by Native Hawaiians on Kalaipapa’s Kaukaho Crater, seen in the foreground, serve as a reminder of the past and efforts are being made to preserve them for future generations. Photo by Catherine Cluett

The Kalaupapa peninsula’s long history of isolation makes it one of the most pristine cultural resources left in Hawaii, according to the National Park Service (NPS). Its 10,700-acre authorized park boundary keeps the landscape raw and untouchable from modern land developers but its overgrowth of invasive vegetation threatens to eat away the traces of ancient Hawaiian residents 1,000 years ago.

Though Kalaupapa is most commonly known for its Hansen’s disease residents that were exiled there in 1866 and the geographic and societal segregation that took place over 100 years, the peninsula hosted a dense Hawaiian population nearly 900 years prior. Their residency left a diverse wealth of sites, features and artifacts that researchers can use to reconstruct the past.

“Artifacts are any objects used by humans, generally more than 50 years old, so we see artifacts all the time,” said National Park Service (NPS) archaeologist Mary Jane Naone at a Kalaupapa community meeting last Tuesday. “We’re really privileged to live and work here and so the purpose of this presentation is to give an educational overview how we can best preserve it.”

However, weeding the area from threatening species may be easier said than done.

“[Removing invasive vegetation] is difficult and there are a lot of questions involved,” Naone said. “When we start to remove vegetation, it opens up the canopy so some of it can grow back. We want to be careful of how we remove vegetation so that it’s a long-term goal.”

Paul Hosten, a terrestrial ecologist for the NPS, said his team is focused on clearing alien vegetation from three main areas that have native flora as well as archaeological sites: the east coast, along the crater, and the northeast coastal spray zone, which is an area where vegetation is adapted to the onshore salt spray emitted from the ocean.

Three predominant invasive species, according to the NPS, include Christmas berry, haole koa, and lantana.

“Where we have native species, we fence it off, we try to remove the deer from those areas and then try to remove and prohibit future growth [of invasive vegetation],” said Hosten.

In areas with dense overgrowth, research can still be done. A laser survey system called LiDAR is one of the tools researchers use to penetrate dense vegetation, according to Naone.

“It’s being used throughout our archaeology because you can actually scan aerially and pick up rock features without having to crawl through vegetation,” she said.

Both Naone and Hosten said they hope to work with volunteer groups to assist with their efforts to better preserve Kalaupapa’s past.

“Our biggest threat to archaeological sites here in Kalaupapa is the vegetation,” said Naone. “So if we can get volunteer groups to help reduce some of that, it’d be a great help.”

Artifacts contribute to the site’s story, Naone said. Once they’re relocated or completely removed from the site, we lose the information that item would have given and we lose part of the story.

The NPS also discourages visitors from building rock monuments in the area because they can mimic real archaeological features and skew future research.

According to Naone, a good rule of thumb the public should follow when visiting Kalaupapa archaeological sites is to leave no trace and to keep your hands to yourself.

“Archaeological sites are non-renewable,” said Naone. “Once they are destroyed, they’re gone forever. So when you’re in a place and you recognize that it’s a place that belonged to the past, just take good care of it…so we can enjoy them for future generations.”

3 Responses to “Safeguarding Kalaupapa’s Past”