Running in the Rain at States 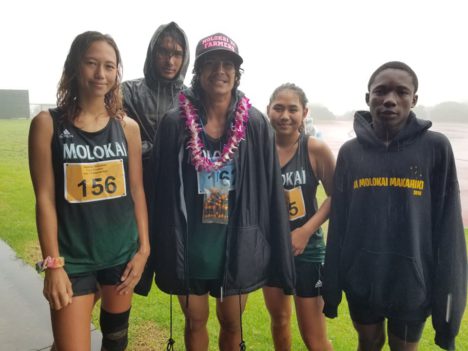 The Molokai Cross Country team traveled to Waimea, Hawaii last Saturday for the HHSAA Cross Country State Championships. All five Molokai runners qualified for states this year and were excited to represent their island. Head coaches Kabbie Bicoy-Juario and Mahina Hou Ross had their runners in top shape and ready to run but did not expect the weather to be a major factor this year. Non-stop rain greeted all the runners and made for a unique cross-country race to say the least.

Namaka Ross was the top finisher for the Farmer boys in 30th place followed by Ku Adolpho in 157th and Johnson Harris in 192nd. Two hundred runners ran for both the boys and girl’s races.

Kailani Bicoy finished in 74th and Tenley Akutagawa was 180th for the Farmer girls.

Bicoy-Juario and Ross were super proud of their runners, and this will be a race they won’t soon forget.

“What started off cold, freezing, pouring rain, didn’t stop the girls for achieving what they set out to do,” said Bisoy-Juario. “Running through puddles and rivers, mud, and more mud they said it was the most fun and exciting run they ever did. We’re super proud of them toughing out this course, practically almost every runner went down slipping and sliding.  But in the end, there was so many smiles. Great season girls, goals accomplished and great memories that were made this season. Thank you to everyone that got them there and the encouragement along the way.”

Kumu Ross has coached Molokai Boys Cross Country for many years and this year his son Namaka and his teammates represented Molokai well.

“The race was run in the Ua Kipu’upu’u, the famous rain of Waimea Hawaii. No- stop rain from the moment we got there till after the awards. Everyone had fun and ran a race they never will forget. Namaka had a real strong finish and beat six to eight boys in the last 200 yards to finish as one of the top finishers for Molokai boys’ cross country at states in all my years of coaching. I am very proud of him and all our runners. They were awesome representatives of Molokai.”